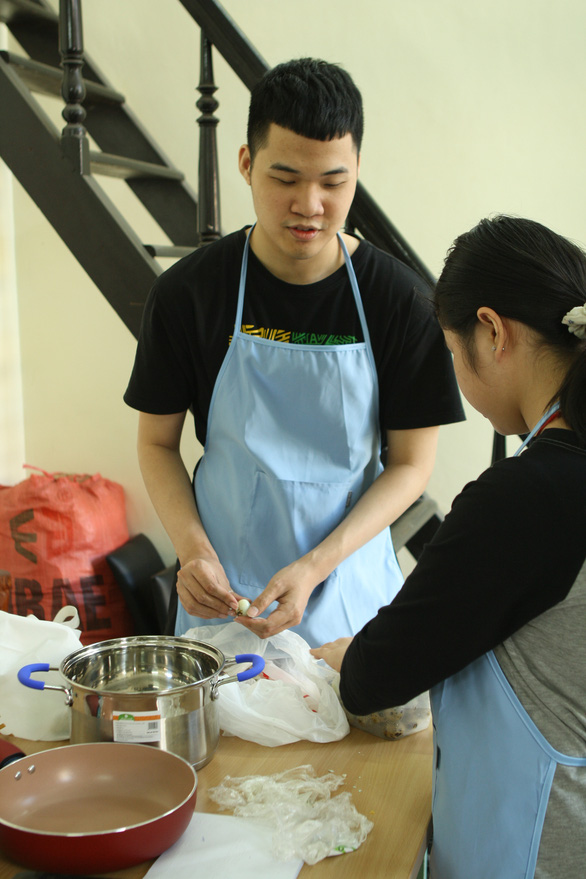 The Ability Fund and the Vietnam Blind Association have recently co-sponsored a unique contest named 'Who is the Masterchef,' in which blind students from high schools in Hanoi competed in cooking with a hope to contribute their efforts to their families and the society.

The competition is part of a two-week project which was initiated by a group of four blind students in Vietnam's capital city, offering cooking skill training classes to visually-impaired students from different high schools and continuing education centers in the region.

These training classes are designed to equip the visually challenged people with basic skills, including cooking, in the hope of supporting their families and the community, said deputy project coordinator Vu Hai Anh.

“Every single person from the blind community shares a wish of not only taking care of themselves but also building up their confidence," Anh said.

"And the project itself has done a pretty good job for that."

To wrap up the training classes, the cooking competition was organized to showcase students’ self-made dishes, spotlighting their extraordinary ability and constant effort during the course.

The organizers expressed their happiness when delivering the much-needed message of living happily to the blind community in particular, and to people with disabilities in general.

The image of the blind chefs has won the hearts of the organizers, prompting them to open up more cooking classes and competitions, where the blind can engage in a practical environment and society.

Luong Tuan Cuong, a senior from Nguyen Van To Education and Training Center in Hanoi, confidently shared his kitchen skills and ability in using the utensils despite the Vietnamese’s traditional unwillingness to let the blind use sharp cutlery due to the potential risk of cutting themselves.

“By attending the classes, I prepared myself with certain knowledge in buying food, choosing ingredients, and preparing meals,” Cuong said.

“Cooking for the visually impaired is way more difficult than normal people as they can only touch and feel with their bare hands instead of visualizing with their eyes," the organizers said.

"Simple cooking practices such as boiling or peeling quail eggs can even pose difficulties for them.

“It often takes a normal person 30 minutes to cook a simple savory dish, while these young people spend up to two and a half hours making a perfect dish.

"We see the hindrances presented to the disabled."

Anh, the deputy project coordinator, additionally shared that the visually impaired now can get out of their box when their lives are no longer confined to toothpick-making or lathering businesses as one might see a few years ago.

“Their livelihoods have dramatically changed when they now can access various working opportunities, starting from their belief and respect for small things like cooking,” he said.