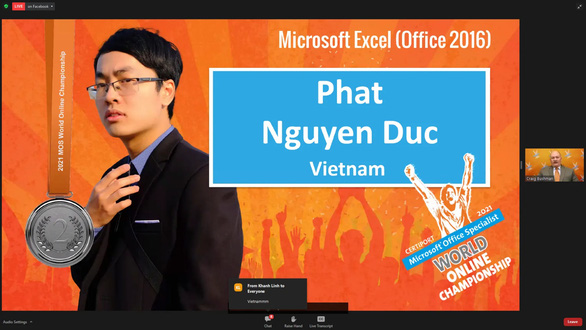 Vietnam’s other three entrants in the competition finished in the top ten, according to the results announced at a virtual awards ceremony on Monday.

Huy said that he was overwhelmed with joy when he was announced the winner of a gold medal at the ceremony.

“My efforts and luck helped me win this important gold medal. It’s a glorious title to my country,” he said.

Phat was also extremely excited to hear that he had medaled in the competition. He thanked the organizers, his teachers, his family, and his friends.

Vietnam’s success at the competition is a big win for the country, particularly when it comes against entrants from the world’s traditional tech giants, including the U.S., Japan, Taiwan, and Signapore.

This year's competition marks the 12th time Vietnam has participated in the world finale of the MOSWC.

Huy and Phat’s success brings Vietnam’s total medal count from the past 12 years to 13, including two golds, two silvers, and nine bronzes.

The MOSWC is an international playground where talented students can showcase their passion for technology and outstanding skills in the Microsoft Office suite, which includes Microsoft Word, Microsoft Excel, and Microsoft PowerPoint.

Information technology experts considered this year's competition to be more challenging than years past due to more difficult exam questions and changes to its structures.

As such, contenders needed to remain highly focused on understanding the rules, analyzing available reference data, and applying the given tools.