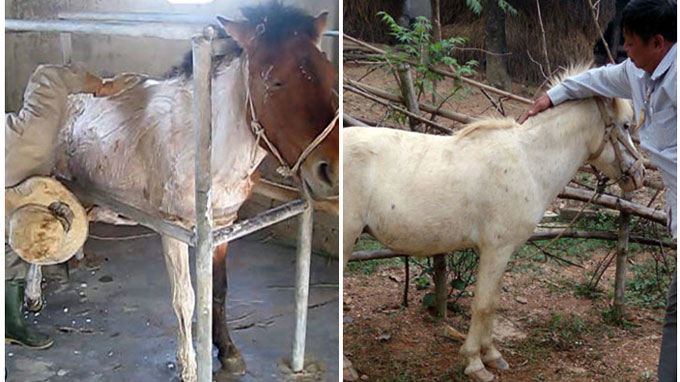 Horses get ‘facelift’ to sell bone paste in Vietnam

As demand for the bone paste of rare all-white and white horses is increasing for its perceived medicinal properties, local horse dealers have begun dying their horses’ hair white to deceive naïve customers.

On a street in Trung Do Ward in the central province of Nghe An, a sign hangs from a shop window advertising the bone paste of cats, monkeys, and white horses.

“If you need a lot more, you should buy a living white horse, and the horse owner will slaughter it and make its bones into paste for you,” N. added.

According to Phong Sa Vat, a famous horse wholesaler in Muong Pet District in Laos’ Xieng Khouang Province, who supplies horses to most dealers in Laos’ Hua Phan Province and the Ky Son border district in Nghe An, there are several distinct differences between all-white purebreds and white horses.

Real all-white purebreds are white all over their bodies, including their genitals, and typically their pupils are outlined in bronze.

At midday, they are momentarily blinded by the bright sun, causing them to stand still, but they see particularly well at night, when their eyes glow red.

The eyes, snouts, and hooves of purebred all-white horses are pinkish, Vat noted, while in comparison, white horses only have white torsos, while their manes are brown and tails purplish.

Vat, 36, owns a herd of 250 horses, including five all-white purebreds and 50 whites, with the rest being brown, black, yellow, purplish, and red.

“We must take extreme caution while guarding over all-white purebreds, as they’re such a rarity. A 150kg all-white can easily fetch up to $20,000, while white horses usually sell for VND6-7 million (up to $333),” Vat stressed.

However, as white horses are hard to come by, and all-white purebreds are such a rarity, horses of all colors can be easily transformed into white horses in a matter of hours thanks to the cunning hair dying ploys of dealers.

At Thanh Long Commune in Nghe An's Thanh Chuong District, a white horse was seen being tied in front of the house of Lan “The Horse,” a local horse dealer.

Lan boasted that the 150kg horse is a high-quality white just bought from Laos. He will not sell it for less than VND28 million ($1,333).

All-whites are available on demand, but clients have to make a VND10 million ($476) down payment on them, Lan noted.

Clients can make a profit of some VND6 million ($286) from the horse’s meat and bone paste.

It’s really difficult for laymen to tell real whites and purebred all-whites from the fakes, as the roots of the horses’ hair are perfectly white and smooth.

There are few telltale signs that can prove that a white horse is a fake, which of course dealers wish to keep secret.

He added that Lan also buys horses from his Laotian supplier for only VND14 million ($666) each.

According to Khai, most local horse dealers traded buffalos and cows in the past.

A number of them later dealt in horses as well, which were usually sold for their meat.

As the bone paste of all-white and white horses has risen in demand in recent years, more dealers have begun to dye the hair of their horses, making huge profits from their fakery.

Dying horses: A piece of cake

According to Nho, a Mong ethnic minority horse “baron” in Nghe An's Ky Son District on the border with Laos, dying the horses is one of the few ways to disguise them as whites or purebred whites.

“It’s much easier to dye horses into whites than all-whites, as fakes must have their eyes, snouts, hooves, and even genitals dyed white to become all-whites. Before dying, clients have to make down payments and the fakes must be sold hours after being dyed, as the horses’ real hair will grow back in a few days,” Khai "The Horse" revealed.

He had to pay another VND1.5 million to have the horse dyed white.

Khai noted that the horse was a real bargain, as one has to pay up to VND28 million ($1,333) for a white horse, regardless of whether it is real or fake.

After the Tuoi Tre reporter made a down payment, Khai walked out with a 1,000ml box of Lavox, a bleaching chemical that is hard to come by, and two packets of white powder.

He squeezed the entire contents of the Lavox box and powder packets into a bucket.

“The Lavox chemical must be applied on a brown horse three times. If overdone, the horse’s hair will get curly and scorched. If properly done, the fakes’ hair won’t go back to its original color even when dipped in petrol. The horses’ real hair will grow back within a few days to one week, but by then the horse will have been sold and killed,” he shared.

The man scooped up the paint-like chemical and applied it to the hair on the horse’s back, combing it repeatedly to ensure the chemical penetrated deep into the hair.

He then moved on to its head, mane, legs, and abdomen and repeated the process three times before drying the horse in the sun.

After only three hours, the brown animal had been transformed into a perfectly white horse.

“We sell our fakes all over the country and can dye the horses in any color a client demands,” Khai boasted.

“Horse bone paste is indeed a miracle drug, second only to tiger bone paste. However, most of the horse bone paste available on the market is from non-whites or fakes. We cheat unsuspecting customers to make a profit,” he admitted.

Quite a large number of Vietnamese people, particularly males, remain under the misconception that tiger and horse bone paste are miracle drugs which can cure bone illnesses and improve physical health and sexual vigor.

The mixture is typically used as gifts among businessmen, officials, and the rich, especially during Tet (Vietnam’s Lunar New Year).