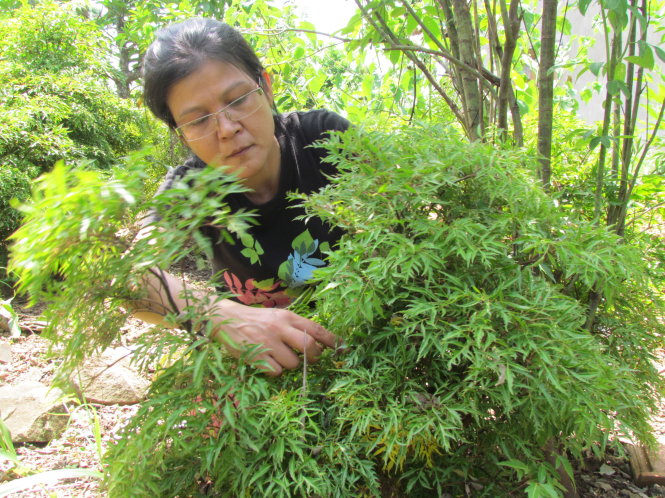 A woman in Ho Chi Minh City has made the most of medicinal herbs in her hometown to produce non-chemical, healthy incense in the past three years.

Burning incense is a long-standing tradition in many Asian countries, including Vietnam.

Incense has been indispensable to many Vietnamese Buddhists and non-Buddhists, who burn joss sticks on a daily basis to make votive offerings to the Buddha and connections with their ancestry.

However, most of the products currently available on the market are made from sawdust and coconut fiber, which are soaked in chemicals, sometimes even toxins.

Three years ago, Le Thien Bao, 39, who is living in Ho Chi Minh City, came up with an innovative way to make non-chemical incense from the medicinal herbs growing in abundance in Tay Ninh Province – her hometown – in southern Vietnam and elsewhere.

“I was infatuated with herbs’ aroma since I was young. I always had some herbal leaves in my school bag, and would follow alternative medicine practitioners to the forest to pick up medicinal plants. As an adult who lives in Ho Chi Minh City, I’ve always craved for the aromas, which drove me to make incense from herbs so that I can relish the fragrance every day,” Bao shared.

As an office worker, she had no idea or experience whatsoever in making incense.

In the initial period, she would shuttle between Ho Chi Minh City and her hometown, some 100 km away, to fetch the herbs.

The small-built woman also performed all the other tasks on her own, including drying the flowers, leaves and roots, chopping and grinding them into incense pulp, and making incense sticks with her miniature machine.

“I’m endowed with a keen sense of smell, so I really enjoy working with aromas,” she added.

However, the incense sticks of her first batch were as thick as a thumb and smelt just like burned leaves.

Undaunted, Bao persevered in her research in the next six months.

Her efforts finally paid off, as the next batch of sticks came just with the right size and smelt pleasantly fragrant.

Incense made from organically-grown herbs

Every weekend, Bao rides her bike to the city’s suburban districts of Cu Chi and Hoc Mon, neighboring Dong Nai Province, and her hometown to visit the households whom she cooperates with in herb growing.

She always makes sure the herbs are grown organically.

“Most households I place orders with earn major incomes from their paddy fields and only grow herbs in their gardens for pleasure. So they don’t use fertilizers or chemicals,” Bao explained.

Such herbs as “huong thao” and “bac ha” (mint) are in demand but do not thrive in the hot climate of the southern region.

So Bao travels all the way to Dak Lak Province in the Central Highlands to place bulk orders with organic vegetable farmers there, who grow the herbs together with their veggies on their farms.

Her incense making process consumes thrice as much time as conventional techniques, as leaves and finished sticks are all dried in the shade for days instead of a short time using the drier.

Her products are thus not bright yellow as conventional incense sticks, but have the brown of dried herbal flowers and leaves.

Unlike pungent, eye-irritating traditional sticks, the fragrance of her incense is pleasantly mild and the leftover pulp is pure white.

Bao then tried to make her incense even more special and healthful by adding the herbs’ medicinal properties, so that users will benefit from inhaling them every day.

She then consulted Le Trung Kien, a traditional medicine practitioner in Dong Nai Province, and Kien immediately began his research on the formulae.

He then came up with new formulae which include cures of ailments such as headaches and running noses in a proper amount.

Bao then concocted her own formulae, resulting in products able to expel mosquitoes and fill the entire house with fragrance.

After three years, her joss sticks – branded “Nui Ba Den,” which is named after famed Ba Den mountain in her home province – are now increasingly known to local users.

Apart from worshippers, most of her clientele are young office workers who often practice yoga and meditation.

“Healthful, less smoky incense is an important requirement for yoga practitioners, who burn it every day during practice sessions for a clear, calm mind. I tried some before, but they were either too pungent with traditional medicine’s unpleasant smells, or chemical-packed. Bao’s products are much better and are a strong reminder of the rustic fragrances in my childhood,” shared Le Thi Thanh Nga, an office worker in Ho Chi Minh City.

Her incense pulp is also increasingly known to foreign partners, particularly those from India, Myanmar, and Japan, which are devout Buddhist countries.

According to Bao, her foreign clients often purchase her pulp in bulk and make incense sticks in their preferred shapes and sizes.

Though their countries have many brands of incense, most of them are chemical-packed.

Bao is now working on how to improve her products’ fragrance, enhance their medicinal properties and the time they burn, and make coiled incense.

“If my products sell well, I’m willing to share my formulae with other incense makers, so that more will be able to tap into our country’s rich, valuable herb resources,” she shared.