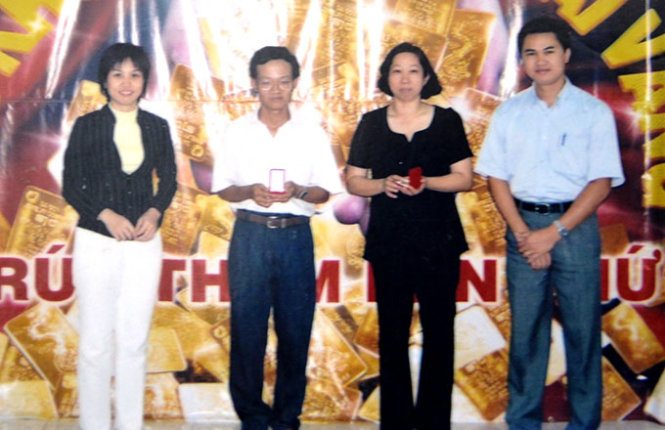 Vietnam man makes a fortune by hunting for promotional prizes

A man in the Mekong Delta province of Tra Vinh has spent 14 years hunting for promotional gifts and has earned a total of several billion dong, with VND one billion equivalent to US$47,068, in the process.

Truong Vu Dung, 36, who lives in the province’s Tra Vinh City, has made a fortune out of his strange hobby- hunting for promotional gifts- by cashing in on his recklessness and calculation.

He has used his “revenue” to provide for himself and his family and do charity work.

Unable to find a teaching job after graduating from a pedagogical college, Dung worked as a mailman at a local post office in Ben Tre Province, also in the Mekong Delta.

During that time, he stumbled upon people who were lucky enough to win promotional prizes, particularly big ones, while perusing newspapers.

Dung joined a promotional program launched by a dairy company in 2000 just for fun.

He was lucky to win second prize, which was a trip to Thailand.

The award spurred him to study how the promotional programs work, and he has joined these programs ever since.

Dung then quit his mail delivery job and moved to Tra Vinh to dedicate himself entirely to his new job.

“I won in all the programs I joined, though the prizes varied considerably in amount and value. I earned tens of millions of dong to up to one billion dong each time,” he said confidently.

The gift was offered in a promotional program launched by a shampoo brand.

Dung spent over VND300 million buying nearly 10,000 shampoo bottles which were involved in the program from outlets across the Mekong Delta.

To be on the safe side, he inked deals with the outlet owners that after he took the promotional numbers from the bottles, he would resell the shampoo to them for VND5,000-7,000 lower than the market price.

The young man calculated he would win several prizes with such an overwhelming amount of promotional numbers.

After the three-month program wrapped up, he lost VND60 million ($2,824) reselling the shampoo to outlets, but he won the car and 42 cell phones from different brands.

“My success so far comes down to risk taking and serious calculation on how the programs work. Most promotional programs don’t put limits on how many codes and applications a client can submit, so I’m likely to gain profits with such an overwhelming amount,” Dung shared.

When a beverage company launched a promotional program early this year, Dung traveled to several provinces, but managed to buy only around 800 bottle tops with promotional numbers.

With four days left before the prize announcement, Dung calculated that the number tops he had didn’t give him a high chance of winning valuable gifts.

He then spent almost VND20 million buying 12,000 bottles from a local outlet.

Dung took the tops only and treated locals in the neighborhood to the drinks.

He won over 10 motorbikes along with dozens of cellphones from the program.

He sold all his promotional gifts and used proceeds from bank savings to carry on with his weird job.

His house is filled to the brim with piles of low-value promotional gifts such as motorbike helmets, T-shirts and cheap cosmetics.

He gives part of them away to needy people.

Dung shared he had a tough childhood, as his parents got divorced when he was young, leaving him alone to care for his four younger siblings.

During his 14 years of hunting promotional gifts, Dung, who has followed a vegetarian diet for the past 18 years, shared he has improved his living conditions considerably and helped a large number of needy people and kids by presenting them with money and learning tools.