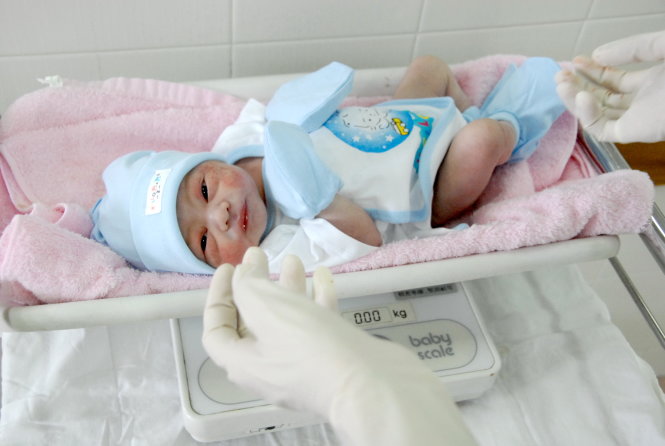 Though surrogate pregnancy has been allowed in Vietnam for almost two months now, many couples still find the service out of reach due to complicated paperwork and refusal to cooperate from different sides.

The regulation which allows surrogacy in Vietnam is part of the revised Law on Marriage and Family that came into force on March 15, enabling people to act or have others act as surrogate mothers for humanitarian purposes on a voluntary basis after satisfying certain requirements.

The three major clinics assigned by the Ministry of Health to handle surrogacy cases are the National Hospital of Obstetrics and Gynecology in Hanoi, the Hue Central Hospital in the central city of Hue, and Tu Du Obstetrics Hospital in Ho Chi Minh City, according to Nguyen Viet Tien, the deputy minister.

Nearly two months after the regulation came into effect, the National Reproductive Assistance Center under the Hanoi-based National Hospital of Obstetrics and Gynecology, one of the infirmaries qualified to perform surrogacy, has only managed to implant the embryo of one future child from a couple into the surrogate’s uterus, and 14 other complete application dossiers, the center’s representatives told Tuoi Tre (Youth) newspaper.

The hospital, which has also received a rising number of people who inquire about surrogacy procedures, has launched psychological, physical counseling services for those in need.

N.Q.H., 38, who lives in the northern province of Bac Giang, is excited about the prospect of having a child now that her sister-in-law has been named her legal surrogate.

H. and her husband have received fertility treatment for the past 12 years to no avail.

However, even though the toughest phase – searching for a legal surrogate – is complete, there is a long wait ahead for H. and her husband to turn their long-cherished parenthood dream into reality.

Meanwhile, Dr. Hoang Thi Diem Tuyet, vice director of Tu Du Obstetrics Hospital, told Tuoi Tre on Tuesday that there has been only one application dossier that satisfies all the requirements at the hospital so far.

The surrogacy seeker, an expat Vietnamese woman who is over 40 years old, has received fruitless infertility treatment, including several test-tube insemination procedures, in both the U.S. and Vietnam.

Learning that surrogacy is now permitted in her home country, she applied for one, with her surrogate being her cousin, who lives in Vietnam.

Dr. Tuyet added the hospital has also seen a rising number of applicants, including a limited number of qualified ones.

However, these qualified hopefuls have yet to return to the hospital.

According to Phan Thi Yen, head nurse at the National Reproductive Assistance Center, both infertile couples and their surrogates have to sign 13 commitment papers, including several that need the local government’s endorsement and lawyers’ counseling, as well as two application forms.

“Several people who were allowed surrogate pregnancy were refused by the local government, which said that it has yet to receive guidance regarding the procedure,” she explained.

For example, officials would not certify that the couples are childless, providing excuses that the husbands may have children born out of wedlock.

Even officials in Hanoi, where information on surrogacy is readily available, deny the couples the needed endorsement or give them nominal, unqualified one.

According to Dr. Ho Sy Hung, vice director of the National Birth Assistance Center, the center receives up to 3,000 applications for birth assistance services each year.

Among them, around five percent are allowed surrogate pregnancy.

“Many couples have led miserable lives due to their fruitless child quest. Now that surrogacy has been permitted, local governments should facilitate couples in completing necessary paperwork,” he added.

Dr. Hung noted that among the 13 commitment papers needed for the surrogacy procedure to be permitted, some require counseling lawyers’ remarks.

A number of attorneys are either reluctant to sign their names on the commitments or overcharge their desperate clients.

Before the Law on Marriage and Family was amended last year, many infertile couples had to go abroad to have others act as surrogate mothers at an exorbitant cost, according to Deputy Minister Tien.

About 500-700 couples have the need for others to act as surrogate mothers in Vietnam every year, according to national broadcaster Vietnam Television.

A surrogacy is a case in which the embryo of a biological child of a woman and her spouse is implanted into the uterus of the recipient after it is created through the in-vitro fertility technique, the health ministry said.

Hospitals that can perform in-vitro fertilization are fully capable of handling surrogacy cases.

Under the new regulation, surrogacy is allowed when the woman who has found another woman to act as a surrogate mother has no uterus, has a deformed uterus that is unable to bear a fetus, or has had her uterus cut off.   Surrogacy is also allowed when a woman suffers health problems that can endanger her life and the fetus if she gets pregnant, or when a woman has undergone repeated miscarriages or has repeatedly failed to conceive a child despite the support of reproductive assistance techniques.