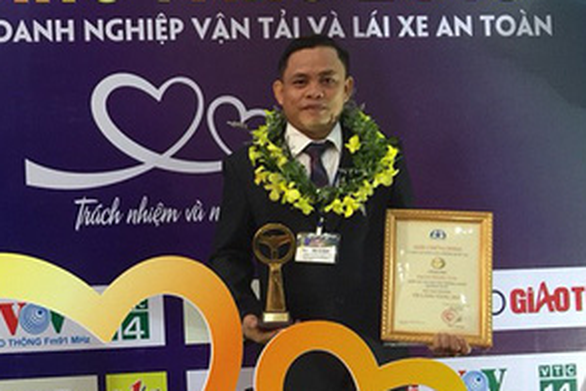 Vietnam’s long-haul drivers, for better or for worse, are known for doing whatever it takes to get a package delivered on time. But for Nguyen Duc Tung, an 18-year veteran driver, a successful trip often means going above and beyond the call of duty to help other motorists in need.

Tung, 46, is a long-haul truck driver from the central province of Quang Ngai who has earned a reputation for his ability to remain calm and collected in the face of danger.

Willing to help against all odds

One of Tung’s first run-ins with disaster took place when another truck driver named Hoang lost control of his tractor trailer near a wharf in the northern province of Quang Ninh.  The truck plunged into the water and Hoang, unable to escape the cab, was in a fight for his life.

When Tung heard the commotion from the nearby café where he was resting, he sprang into action and raced down to the wharf to rescue his colleague and bring him back to dry land.

“He was really struggling,” Tung recalled. “Had I arrived ten seconds later he would have been done for.”

Tung once again found himself coming to the rescue of a fellow driver on one early morning in 2005 in a remote area of Quang Ngai Province.

As he manoeuvred through a winding section of highway, a driver behind him began signalling to pass.  Not waiting for Tung’s response, the driver merged into another lane and began to speed up but just as he did a heavy-loaded wood carrier began approaching from the opposite direction.

“I honked as loud as I could to warn the truck driver,” Tung explained.

But it was too late.

“The truck driver lost consciousness after the collision. There was blood everywhere,” he added.

Springing into action, Tung kept his cool and made it his mission to get everyone involved to safety.  First, he attached his truck to the damaged vehicle and began to drag apart so he could reach its injured driver. Next, he alerted the police and called on locals for help.

“I held the injured man while a local took us to the hospital,” Tung recalled.

Afterwards, he returned to the scene to give a statement to police, collect his truck, and continue on his route.

Though a fear of rehashing the terrifying story keeps him from visiting the now permanently handicapped driver, Tung does his best to show support.

“I send gifts to the man every now and then via our mutual contacts,” he shared.

In 2012, Tung once again came to the rescue, this time to a family of four.

Huynh Van Thanh, 45, was carrying his wife and their two children on a motorbike when he lost control of the vehicle due to a wet road and crashed into the side of a passing bus.

Thanh and his family all fell off the bike and would have been ran over by Tung, who was driving behind them, had he not stopped his truck in time.

Tung then took it upon himself to transport Thanh and his family to the hospital, ultimately saving their lives.

“If not for Tung we would have been deep in trouble.  Our youngest son would have died,” Thanh shared.

But Tung isn’t just known for saving lives, he’s also widely recognized for the example he sets for other truckers. Rookie drivers in the area know that if they speed or overwork themselves, Tung will have something to say about it. He also is a keen advocate for helping anyone on the road who might be in trouble.

“What I appreciate most about Tung is his selfless mindset. He taught me about the necessity of patience on the road,” driver Le Van Tuan said.

“Minding others is also a form of self-responsibility – don’t be reckless for a mere second and then be forced to regret it for years later,” he said.

According to Tung, he inherited his conscientious mindset from his father, also a veteran long-haul driver.

At first, his father banned all of his children from trucking, but Tung took a liking to the job and refused to do anything else.

Tung is now a first-class truck driver for a transportation company assigned to a route covering spanning northern Vietnamese localities and parts of mainland China.

“I work to put food on the table and do my best to exercise caution. In my line of work, even the slightest mistake is irreversible. I don’t understand why so many of my peers are creating trouble lately. It’s really upsetting,” Tung admitted.

Tung’s work etiquette is even applauded by his superiors.

“Though he [Tung] can sometimes be very hot-headed, once he is behind the wheel, almost nothing can shake him up. His maintenance skills are also top-notch,” said Le Si Thanh, director of Thong Nhat Transportation Co.

In light of his dedication to social responsibility, Tung was presented with the 2018 Golden Wheel award by the National Traffic Safety Committee of Vietnam.

The award is bestowed annually to distinguished drivers who exercise great skills and/or heroic feats on the road within that year.

“We cherish drivers such as Tung. We hope more follow in his footsteps,” Ha Hoang Viet Phuong, director of Quang Ngai Department of Transport, said.