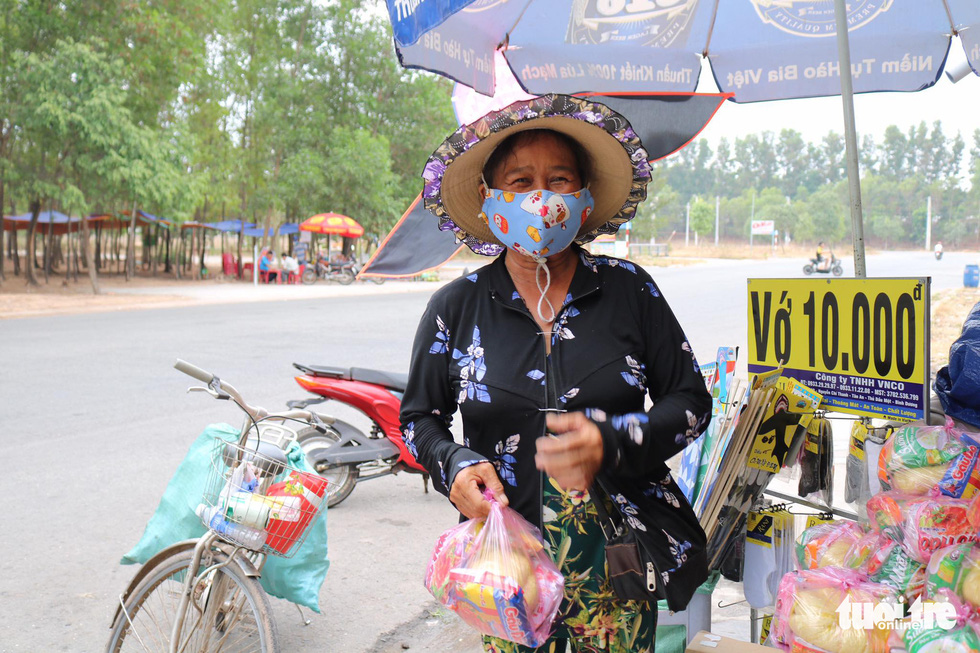 T.V. Duong, 62, spends his days rolling through Rach Gia City, Kien Giang Province on a hand-operated tricycle, constantly on the lookout for anyone who might want to buy the lottery tickets he sells to make ends meet.

Now, following an order from Vietnamese Prime Minister Nguyen Xuan Phuc prohibiting lotteries throughout the country from releasing new tickets until the end of April 15, Duong and thousands of other Vietnamese who make a living selling lottery tickets are struggling to figure out how they will survive the next two weeks.

On March 29, the prime minister approved a plan by the Ministry of Finance to stop all lottery activities, alongside a more drastic measure green-lighted two days later to curb the transmission of the novel coronavirus disease (COVID-19) in the country through government-mandated social distancing between April 1 and 15.

The order is a heavy hit to the lottery ticket selling community, a group that already struggles to scrounge up enough cash to afford rent and food.

Duong is no exception.

Three years ago, Duong lost part of his left leg in an accident.

His wife and two sons left him after that and he soon found himself selling lottery tickets on the streets of Rach Gia, the capital of the coastal Kien Giang province in southern Vietnam.

“I don’t know if I’ll be able to survive the next few days. I’m all by myself and my savings won’t last very long,” he said.

According to government estimates, there are about 3,000 lottery ticket vendors in Kien Giang, of which 1,100 are handicapped or over the age of 65.

“I sell lottery tickets to take care of my parents. Now we don’t know how we’ll be able to live,” said Son.

Son might be one of the younger lottery ticket sellers in the province, but a life-long physical handicap has left him with very few job prospects. If he cannot sell tickets, he will have no other way to bring in cash.

Over the past two weeks, as local residents have hunkered down to wait out the COVID-19 epidemic, Son’s 200 daily sales dropped to just 20.

Now, with the new government order, they are down to zero and fear is sweeping over the entire lottery ticket selling community.

“I am scared,” Nguyen Thi Hai, a lottery ticket seller in Soc Trang Province, located in the Mekong Delta, who uses her meager income to support an injured husband and eight-year-old son.

“Now that I have to stop working for 15 days, how will I get money for rice?”

'No one left behind'

By the time the suspension of lottery ticket sales was announced, local authorities and lottery companies in cities and provinces across Vietnam had already been working on a plan to help their vendors.

Duong Thanh Trung, chairman of the People's Committee of Bac Lieu Province in the delta, signed a dispatch on March 30 directing the state-owned Bac Lieu Lottery Company to support its underprivileged sellers.

Specifically, the company was asked to work with its subsidiaries and related agencies to ensure the sellers are provided for during the 15-day cessation, keeping in line with the government’s motto of “no one left behind.”

During a meeting on March 29 when he approved the pause in lottery ticket sales, the Vietnamese premier was clear about prioritizing the country’s underprivileged citizens, stating “the important issue we need to discuss is the lives of the poor.”

In an online meeting late last month with authorities of the city’s 24 districts, Chairman of the Ho Chi Minh City People's Committee Nguyen Thanh Phong requested that the Department of Labor, War Invalids, and Social Affairs to draft a scheme to support lottery ticket sellers.

According to Phong, it is not just the families who depend on commissions from lottery ticket sales, but also the family members they support in their hometowns using their meager incomes.

“We have to give them a hand during this time,” he said.

To mitigate the impact of the prohibition of lottery ticket sales, the city’s Department of Labor, War Invalids, and Social Affairs on April 1 proposed providing each of the estimated 8,000 sellers in the city with VND50,000 ($2.1) daily over the 15-day period.

On March 30, Nguyen Thai Binh, director of the state-owned Hau Giang Lottery Company in Hau Giang Province dicided to give away 200 tons of rice to the locality’s lottery ticket vendors through the company’s subsidiaries.

The next day, the Can Tho City Lottery Company, in collaboration with the Vietnam Fatherland Front Committee and the city’s Labor Federation, offered gift baskets filled with rice, instant noodles, and cooking oil, worth VND500,000 (US$ 21.06) each, to local lottery ticket sellers.

“I lost my job but at least I have rice and noodles so I don’t need to worry,” said Nguyen Thi Thu Nhung, 52, who has sold lottery tickets for 20 years.

In addition to government efforts, local residents are also doing their best to support lottery ticket sellers in their communities.

On the morning of March 31, people in Hoi An, Quang Nam Province offered hundreds of bags of rice, fish sauce, instant noodles, and face masks to those no longer able to earn a living due to the prohibition of lottery ticket sales.

“I couldn’t sleep last night and neither could the fellow sellers in my neighborhood,” Le Thi Nguyet, 56, a lottery ticket seller in Nui Thanh District, Quang Nam, said.

“We don’t know how we’re going to survive.”

“I hope together we can overcome this tough time,” Quan said.

And those he has helped are more than thankful.

“Selling tickets is my only job. I’m still worried about food and rental payments but a gift like this is big for us. It helps us live and reminds us we’re not left behind,” said Ngoc Suong, 45.

During the past days, local media have been publicizing kitchens offering free food and essentials to underprivileged residents.

“If you are having a tough time, please take one. If you are fine, please leave some for others,” reads a sign at one such venue.