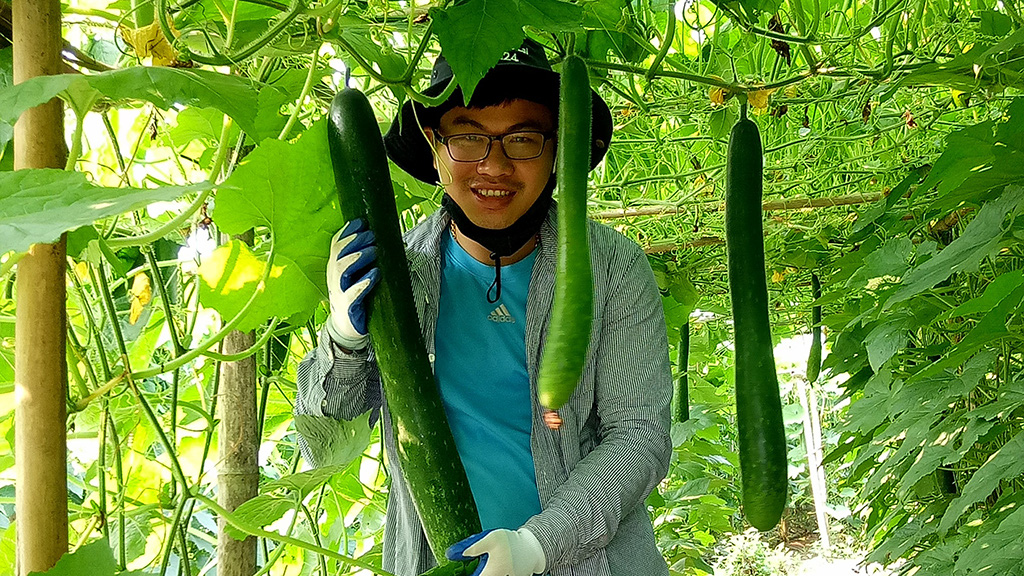 Thirty-year-old Nguyen Trung Kien supports himself and several other members of his ethnic minority group in the northern Vietnamese province of Hoa Binh thanks to his innovative techniques for producing clean agriculture.

Kien, a member of the Muong ethnic minority group in Doc Lap Commune, Ky Son District in Hoa Binh, had a childhood marred by the loss of his mother at a young age.

To make matters worse, his father was an alcoholic who gave the neighbors little reason to respect the family.

Still, despite his rough upbringing, Kien has succeeded in developing a business he not only uses to support himself but to benefit his community.

His achievements secured him a seat at the Global Young Vietnamese Scholars Forum – an initiative meant to applaud young intellectuals who have played a role in boosting Vietnam’s growth and promoting its global economic integration.

“I was under a lot of pressure because of the invite and wasn’t sure if I was going to join. What I had been doing was nothing compared to other attendees’ accomplishments,” Kien shared.

None of Kien’s three elder sisters finished school, but as a young man Kien developed a keen dedication to his studies.

He never missed a day of school despite a 15-kilometer walk from the nearest bus stop to his home every day.

Kien eventually made it to college and in 2009 became one of his commune’s first full-time college students despite murmurs in the community that he would never be successful in the urban workplace without the right connections.

After graduation, he landed a job at a pesticide company in Hanoi.

After entering the agriculture industry, Kien was surprised to find that several farms in Hanoi’s outlying Dong Anh and Me Linh Districts were extremely profitable.

By contrast, farmers in his hometown were struggling to make ends meet due to their dependence on rice and corn crops.

He later began to build connections with the farmers in Hoa Binh through visits to paddy fields to test pesticides and training workshops he hosted for farmers.

“I was driven to do research into how to improve their livelihood and tap my hometown’s plentiful land and labor resources,” Kien shared, adding that such experiences were the inspiration for launching his first seedling and pesticide shop in Hoa Binh in 2016.

Through the shop, he also provides farmers with counseling on farming techniques and guarantees outlets for their produce, particularly gourds.

The products grown by the farmers in his network have since made their way to Hanoi and other northern provinces including Hai Duong and Hung Yen.

As the business grew, Kien and his wife were able to open a mini supermarket to provide essentials at affordable prices for local residents.

They now run four stores and mini supermarkets and use the businesses to provide jobs for local youths.

In his free time, Kien teaches his Cambodian wife Vietnamese and spends time learning the Khmer language from her.

He also runs a free English class for children in his neighborhood.

“I’m so impressed with Kien’s resilience in the face of adversity. He sets a shining example to local ethnic young people and also contributes to his hometown’s growth,” said Bui Thi Nhi, a teacher at Doc Lap Elementary and Middle School for ethnic minority students in Kien's hometown.