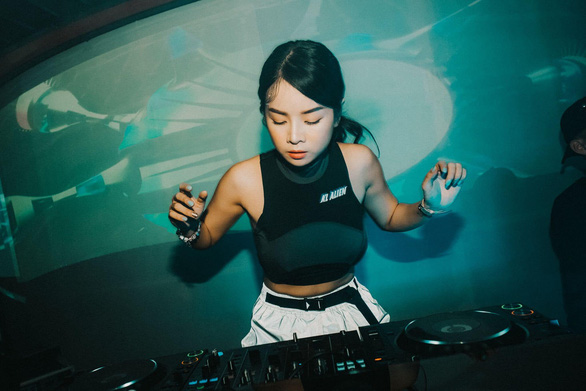 As nightlife in Ho Chi Minh City shuts down once again due to the fourth surge of coronavirus cases, local DJs must search for new grooves to keep themselves afloat – with no live audience in sight.

Ho Chi Minh City is home to arguably Vietnam’s most bustling nightlife scene, with hundreds of active night spots and a roster of DJs who strive to pursue club music as a full-time job.

The recent emergence of club culture, aided by TV shows and star-studded music festivals, has been felt in the city over the past few years, pushing esteemed DJs, namely Mie, Trang Moon, King Lady, Cuong Lost or Wang Chan, to celebrity status.

At this rate, working DJs can make dozens of millions of Vietnamese dong (VND10 million = $436) per month, which can go up to hundreds of millions for star performers.

The job usually starts around 9:00-10:00 am and does not end until the wee hours of the next morning.

It is seen as extremely taxing, even hazardous due to late working hours and constant exposure to loud noises.

In a bid to curb the ongoing fourth wave of coronavirus infections, authorities in Ho Chi Minh City have shuttered all bars and clubs since April 30.

As observed by a Tuoi Tre (Youth) newspaper reporter, pubs and bars on Pham Van Dong Street in Go Vap District, once teeming with party-goers, have now all shuttered their front doors.

This is the fourth closure that nightlife venues in the busy city have gone through, as three previous outbreaks had forced them to close down for months, putting the whole sector on tenterhooks.

DJs, among others, are the first to feel the ripple effect caused by the pandemic, as live performances – the most important source of income for them – are no longer available.

During the pandemic, many fellow DJs that Phuoc knows are working day jobs, from sales and teaching to delivery, to stay afloat.

According to DJ Mie, the time of introducing and playing recorded music as a career is entering its heyday in Vietnam.

However, before the scene can familiarize the general public with it, there are still mountains to climb, as the job, or nightlife culture in general, is still stigmatized as a decadent lifestyle laden with drugs and booze.

Despite growing demand, competition among the sphere of DJs is fiercer than ever, according to Phat Nguyen, also known as Phatbeatz – an old-school hip-hop DJ who mentored many top-billing names in the local nightlife scene.

“Young people [who wish to become DJs] are lacking facilities, professional environments to learn, as well as job opportunities and a community to foster them,” he remarked.

“This explains their shortcoming in foundational knowledge and career orientation, which leave the youth at a grave disadvantage against veterans when it comes to job booking.”

Young DJs are also seen with a lack of formal training, which significantly diminishes their chance to win contracts at venues and events, Phat added.

Facing job scarcity, many of Phat’s mentees had to work day jobs to support their music pursuit.

With concerns over the state of the DJ sector in mind, Phat was inspired enough to launch Muse Inc., a DJ-booking agency and training academy that seeks to equip aspirants with solid fundamentals, realistic industry knowledge and, most importantly, an entry point to the nightlife scene.

With venues shut down during the pandemic, Phat and other DJs are venturing out into new directions, including music production, songwriting, and live-streaming to sustain their creative flow and generate income.

“I think the pandemic is a time for us to see our lives from different perspectives," Phat said.

"It is also an opportunity to keep learning and growing.”