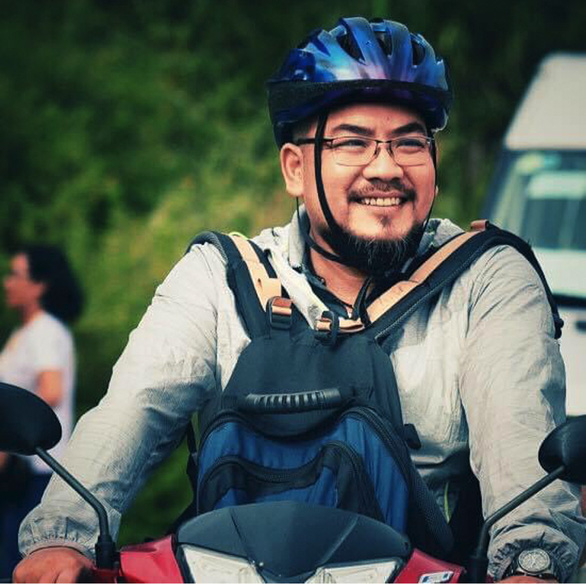 The lives Pham Phu My has helped save with his rare blood and the thankful messages he receives from the needy people he has aided over the past decade make his hard work worth it.

My, a resident of Chanh Lo Ward under Quang Ngai City, the capital of the namesake province in central Vietnam, has donated blood, without fail, over the past ten years or so because of his rare AB blood type.

The 42-year-old has made more than 40 blood and platelet donations, including over 30 times when he was called for emergency blood transfusions as there was no blood readily available for a patient in need.

Whenever there is a call, the veteran volunteer is willing to put aside his personal errands to donate the life-saving fluid to much-needed patients.

My is also an active member of a charity group that works to help Vietnamese children in distress and reach out to disadvantaged members of ethnic minority groups including Cor, H’rê, and Cadong scattered in remote, mountainous areas.

‘Blood donation is just as urgent as firefighting’

An urgent call from a desperate husband whose wife was experiencing complications during labor around three weeks ago is still fresh on My’s mind.

The touching plea for help immediately prompted him into action even though it came late in the morning when My was staying home to practice social distancing in place to curb the spread of the novel coronavirus,.

Bearing in mind blood donation is just as urgent as firefighting, he rushed to the hospital and gave away four units, or 1.2 liters, of blood.

That amount was not enough for the pregnant woman, who was in a critical condition, however.

Only six of more than 200 members of the 'living blood bank,' which My is part of, have the AB blood type but they should not have another blood donation until some time after their most recent donation.

With no time to waste, My called his wife, who had generally been ineligible for blood donation due to her weak physical conditions despite carrying the rare AB type.

“To tell the truth, I was worried the donation might take a toll on my wife’s health,” he admitted.

“Fortunately, my wife was eligible that day and she managed to give another unit of blood.”

My and his wife were relieved to learn the woman and her newborn soon made it through the operation alive because of a timely blood transfusion.

His major concern is the donation of such a large single-time volume of blood means he is deferred from donating blood for up to three months.

There are also other challenges.

He has become a fixture at local hospitals and a source of inspiration to potential blood donors.

Apart from regular and emergency blood donations, he has helped raise public awareness and encouraged those with the rare blood type to become donors as well.

Wee hours in the morning and holidays have not stopped the man from reaching those in need, as blood donation has become a usual part of his life.

When there is a call for blood donation even in the small hours or during public holidays, he will show up right away.

On the fifth day of this year’s Lunar New Year, a time for family get-togethers, which fell around February, My became the first person to give platelets to a child patient at the provincial Obstetrics and Pediatrics Hospital.

“I’ve never put my phone in silent or vibrating mode even at night, or else I may miss an emergency call and fail to save some lives,” My said.

“I hope to stay healthy and continue to donate blood and platelets for many more years to come."

Apart from regular blood donation, My and his charity group, Facebook Quang Ngai, always reach out to disadvantaged children in remote areas and help vulnerable people each time Vietnam is hit by a pandemic wave.

He cannot remember how many kilometers he has traveled around year-end, Mid-Autumn Festival, and back-to-school events to gift essentials to the needy and bring smiles to young faces.

The photos and video clips he brings back from reconnaissance trips to the off-the-radar areas help the group raise funds from philanthropists from across the country to hold their charity tours.

The kind-hearted man and other group members pay occasional visits to a local orphanage where they give away milk and sweets and help out in whatever way they can.

My is also active in offering assistance to compatriots in Ho Chi Minh City, Vietnam's largest COVID-19 epicenter, and other affected southern provinces, where many people are struggling to survive the pandemic after all non-essential services have been shuttered since the newest wave of the coronavirus hit in late April.

He said he did so also as a way of paying it forward after he had received aid from unknown philanthropists from the southern metropolis and other localities.

My is happy that his philanthropic spirit is shared by his family members.

“What makes me most happy is that my wife and kids are all willing to help the needy,” he proudly shared.

“My son, who will turn 18 next year, will also sign up for blood donation as we do.”

According to Dr. Huynh Thi Thuan, head of the Hematology and Blood Transfusion Department of Quang Ngai General Hospital, seeking platelet donors for the AB blood type is quite a challenge.

“Only a handful among some hundreds of potential donors come back eligible for platelet donation after meeting requirements on body weight and other medical parameters,” she said.

“We always have My and other AB-type blood donors to thank for.

"Their precious contribution kindles hope and bolsters strength among us doctors.”

My was honored in 2019 by the chairman of the Quang Ngai People’s Committee for his blood and platelet donation commitment that had spanned the past several years.