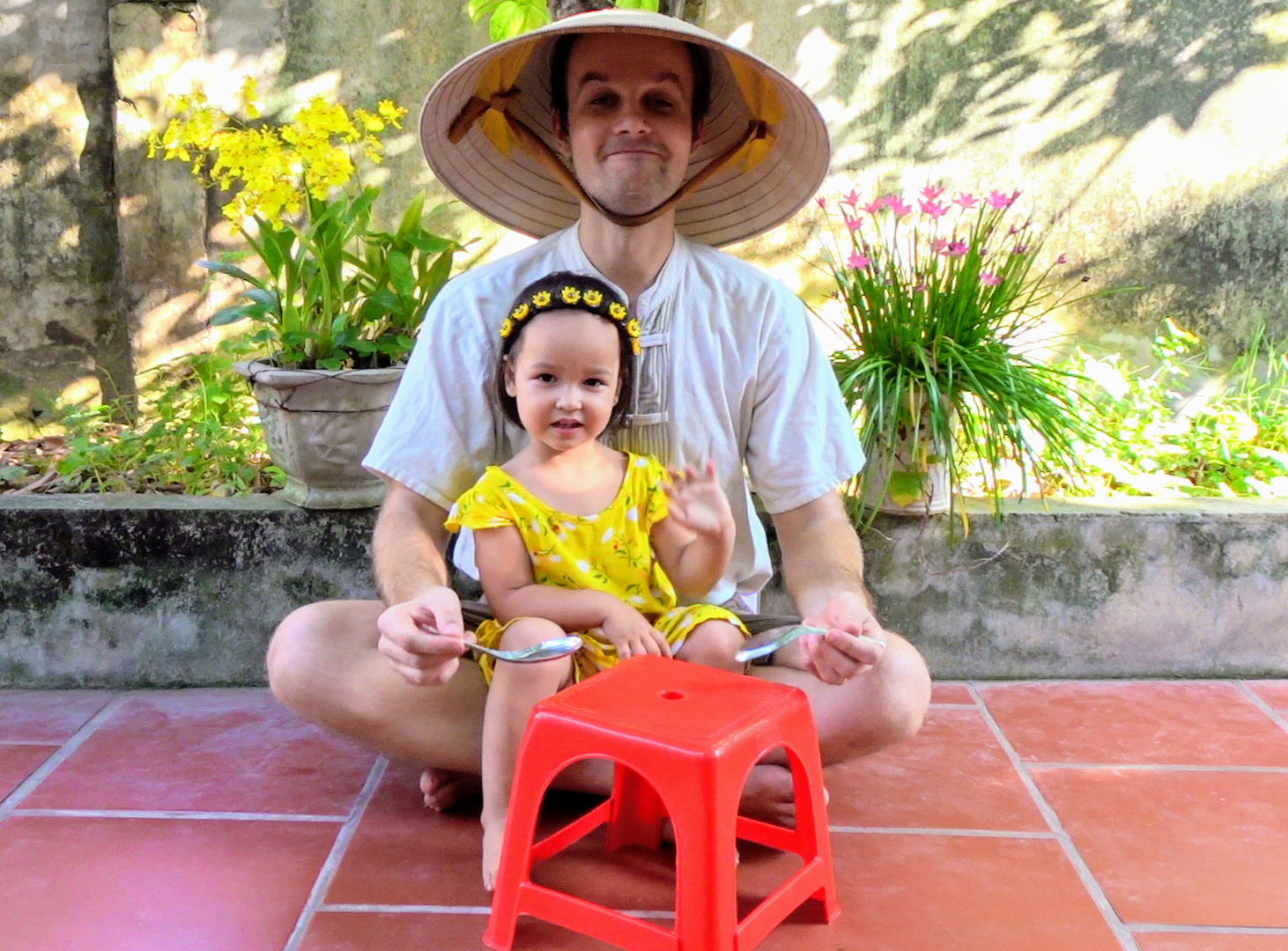 A number of foreigners living across Vietnam have done what they could in the hope of supporting people in the country during the COVID-19 pandemic.

Meigo Mark, a musician from Estonia who is living in a small village in the northern province of Thai Binh, on August 22 released his music video of the song titled 'Noi Vong Tay Lon' (The Great Circle of Vietnam), a song by late renowned composer Trinh Cong Son celebrating the solidarity among Vietnamese people.

Earlier, Mark had spent a whole month practicing the song with his wife helping correct his Vietnamese pronunciations with which he “struggled a lot.”

In fact, he had plans to make a music video of the song since last year.

“I really love the message of unity that this song carries and as a musician, I also love the melody, harmony, and rhythm which are very simple yet truly powerful,” Mark told Tuoi Tre News.

“I really wanted to make my own unique version and combine it with some beautiful video clips that I have filmed across Vietnam."

While the guitar part was performed by Vietnamese artist Van Anh, all the singing, trumpet, drums, audio and video editing was taken care of by Mark himself.

Mark’s music video was to encourage people to join hands and stand together in this tough time to fight against the COVID-19 pandemic.

“The Vietnamese people are already very tough and united, they have joined their hearts, minds, and hands to overcome the COVID-19 challenges together,” he remarked.

“The soldiers from the north to south who carry the food to people have really joined forces with each other and with the residents.

“So many lives depend on the healthcare workers, as well as their non-stop hard work, minds, hearts, and hands.

“Throughout history, they have faced many extremely difficult challenges and very hard times that have made them only stronger, better, and more united.”

Mark first came to Vietnam in November 2016 as part of his walking trip around the world, without knowing that he would meet the love of his life there.

In October 2018, he married his Vietnamese wife and has since settled down in northern Vietnam.

The couple said they would wait for their little daughter to grow up before the family started to hit the road again.

“I hoped to continue traveling around the world last year, but now I feel very lucky, blessed, and happy to be ‘stuck’ here during this pandemic period in a very small and peaceful village with people who are hard-working, generous, and funny,” Mark said.

“Our village has very clean air and water as well as lots of nature and space, while our small little garden features all the different fruit trees, vegetables, and flowers and our tiny house has become home.

“This is a truly amazing place for our daughter to spend the first years of her life.”

Chris Lewis, who is living in Hanoi, chose to spend one of his nights in early July surprising a local street vendor and her buyers.

Approaching the stall in front of Mai Dich Park in Hanoi’s Cau Giay District, Lewis asked to buy all the goods from a middle-aged lady.

The big deal at first confused the seller who later offered a price of VND1 million (US$44).

However, the American man refused and said he would only like to pay VND5 million ($220).

Shocked by the strange 'bargain,' the street vendor explained that VND5 million was too much for the things she sold, and insisted on receiving only VND1 million.

At that time, Lewis was certain about his offer as he was conducting a charity activity in which one of his fans donated $200 for him to do something meaningful.

A YouTuber with 587,000 subscribers, Lewis drew his fans' attention after a June video of him buying 50kg of lychees to help farmers in the coronavirus-hit northern province of Bac Giang, and giving away the fruits to the people he met on the streets.

“One viewer watched my video of me giving away lychees and offered to help out for another video,” Lewis told Tuoi Tre News.

“Actually, I had already planned to make the video about the street vendor lady before the viewer messaged me, but when the viewer offered a donation, I thought it would be a good video for the donor to participate in.

“I have seen that lady there for months, every time I drive on that road. She is always out selling vegetables very late, until 1:00, 2:00, or 3:00 am, and with social distancing, I knew that she had been having a rough time. I could have chosen many people, but I just had a good feeling she was the right person for that donation.”

After managing to buy the vendor's stall at VND5 million, Lewis stayed at the place and started to 're-sell' the veggies at zero cost to buyers.

His act quickly caught the eyes of customers who happily took only enough of what they needed and later joined him to 'sell' the goods to others.

Lewis managed to have all the vegetables distributed at around 10:30 pm that night.

After the video was published, he received some negative comments including one saying he only made the video to show off on YouTube.

“I filmed the video because YouTube is my job. I've done a lot of charity work in various countries such as Cambodia, Nepal, Vietnam, and China, and I never used to film it. But now that I have a large YouTube channel, filming charity work inspires others and also helps get more donations for future videos,” he told Tuoi Tre News.

“Since the video, I've received five to ten more emails from viewers wanting to donate. That’s another $1000-2000 to help people, all because I chose to film it and inspired them."

After around two years in Vietnam, Lewis, whose Vietnamese is good enough to stun his viewers, does not hesitate to show his love to the Southeast Asian country in his videos of traveling from north to south, experiencing cuisine, and learning about local culture.

“I really love Vietnam and its people. What I love the most about Vietnam is all the young people with ambition to develop themselves and their country. Vietnam is a developing country with lots of opportunities, and the majority of young people also realize that," he said.

“I also love that people find small ways to enjoy life, such as having pho in the morning, drinking tra da (iced tea) in the afternoon, or going to a coffee shop in the evening. People here balance work and life, and I really enjoy and respect that way of life."

Being an amateur boxer in his younger years, 37-year-old Matthew Donald in March fought again in a match to raise $64,500 for the Saigon Children's Charity, helping build two schools and support 'COVID Backpack,' an initiative which has sent 3,395 backpacks of essentials worth VND1.4 million ($62) each to families affected by COVID-19 across Vietnam.

As part of his effort to join Vietnam in fighting COVID-19, the man from the UK cooked Vietnamese beef stew for a hospital in the southern city of Vung Tau.

Staying in Vietnam helped him realize many positive aspects in both Vietnamese and foreigners who have encouraged and supported one another to spread optimism and keep calm during these tough days, Donald said.

Meanwhile, Amor Garcia, one of the foreigners receiving an aid package of essentials and VND1.5 million ($66) in cash from the local government in Ho Chi Minh City’s Phu Nhuan District late last month, admitted that she felt “really grateful.”

“I know a lot of Vietnamese people are suffering right now, and yet the government never forgets the foreigners who are suffering too,” she told Tuoi Tre News.

“I hope the local people will also get the help they need."

When there was no pandemic, Filipino Garcia who has lived in Vietnam for 18 years worked as a kindergarten teacher in the morning and a singer in the evening.

“I have been out of work since May, I may have a little savings but that cannot sustain me for a long time. I need to pay for rent, electricity bills, and buy basic stuff like soap, shampoo, detergent, and toothpaste. So, the gift that they gave me is a big help for me,” she said.

“I love and respect this country. All the people I met have been very kind to me.

“Especially during this time, I have felt how helpful and generous the Vietnamese people are,” Garcia concluded, adding that she has received assistance from her church, her friends as well as her landlady who has reduced her rent and provided her with food.

“I will forever be thankful to Vietnam.”