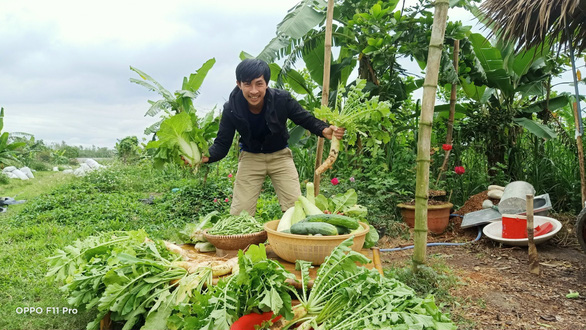 Now, this intellectual is throwing himself into the fields in Quang Nam Province, located in the central part of the country.

He makes a good living for himself, has a natural setting for his children, and hopes to spread his method to fellow farmers.

The small country-style bungalow belongs to a young couple who were academics that once earned thousands of U.S. dollars a month, a rather high income in Vietnam.

His model of business has inspired many young city dwellers to leave for the peaceful countryside of Quang Nam.

The farmer who never stops learning

Nhan was recruited by a petroleum company in Ba Ria-Vung Tau with a salary of VND20 million (US$882) per month upon his college graduation.

In 2017, Nhan came to Da Nang City, near Quang Nam, where he dabbled in agricultural basics.

The first project that he and his friends worked on had a mere VND5 million ($220) in funding. It focused on aquatic vegetable growing.

This attempt came to a halt due to financial pressure.

Nhan, however, found a new path in the book 'The One-Straw Revolution' by Masanobu Fukuoka.

“We learned the way the Japanese do their agricultural work," he said.

"We established a clear financial scheme, researched a lot more and finally we drafted the most feasible project based on our knowledge.

“I contacted two people via email. One was my college classmate, Dao Van Nghiem. The other was Mr. Vijay, my former Indian employer.

“They agreed to join me.”

In the final half of 2017, they conducted their pilot study of the organic agricultural approach on a piece of land that they rented.

“With Mr. Vijay’s support, we tried to implement a sustainability method of farming that blends both agriculture and forestry," he recounted.

“Gardening, fish farming, farm animals, and forestry are all parts of the cycle.”

The growth and the costs

In 2018, the team leased some farmland in Dien Hoa Ward, Quang Nam.

Their establishment was called Rom Vang – a 1.5-hectare area of sandy and muddy soil, abandoned for ages due to its high level of salinity.

The entrepreneurs flung themselves at work, renewing the field to enhance its quality.

Nhan realized at that moment how hard it was to produce a crop of rice and vegetables. He could identify with the tough life of Vietnamese farmers.

The Golden Straw Farm began to grow thanks to a great deal of efforts.

For the plants’ protection, they had to cope with pests and rats.

At times portions of their rice fields were horribly devastated by the rodents.

The biggest blow, however, was the closure of the farm.

In 2019, the landlord noticed that Nhan had successfully revived the land and decided to cancel the contract.

The first-time businessman had not seen this coming. He had to quickly ‘clean things up’ and returned the land.

“I was struck dumb. I never anticipated that. I really trusted the landlord,” he said.

“I believed that with my success, I would widen this mode of farming to more farmers in Vietnam.

"But things did not go the way I had planned.

“I agreed to give up and leave because I was not well versed in legal practices."

The owner of the Golden Straw was not mad at the landlord despite such a plot twist. He acknowledged that part of this incidence came from his gullibility and poor vision.

Following this strike, Nhan came under a ton of pressure from his family members.

“I was really depressed. My life seemed stuck in a deep hole. Every day, I was riding my bike along the fields and could not do a thing,” he recalled.

“Within two months, my body was weakened. I basically looked like a dried fish.

“But in my darkest of moments, I had a strong urge to rise again."

The man encountered a partner who had similar experiences with agriculture. His balance in life and his will made a comeback.

In 2019, Nhan signed a contract to rent a 3.5-hectare area of land to pursue his farming passion.

He had help from the local authorities in Dien Hoa Ward.

The man soon modified the barren land with his outstanding know-how of agricultural practices.

One of the key principles that he strictly followed is the interrelation between natural elements.

Nature depends on itself. Chemical substances are obsolete when the crop remains organic.

It is hard to imagine that this farmer who sits in the hut observing children playfully running in the fields was once a petroleum engineer.

He is a scientific farmer though. He keeps a record of the planting and caring process, soil specifications, and details of his fields.

He runs an analysis of such data the way an agriculturalist performs an experiment.

When the storms were about to set in, Nhan braved them and harvested the rice, corn, and peanuts.

Against unfavorable weather and pests, his crops are highly prolific thanks to his approach to farming.

This is higher compared to chemically-supported rice crops in Quang Nam Province in general, which average 3,250 kilograms.

The peanuts from Nhan’s farm also reach an average of 1,350 kilograms per 5,000 square meters, higher than the average crop in Quang Nam which sits at 1,250 kilograms.

Products from the Golden Straw 2 are purchased at two to three times the price of non-organic crops.

This is another motivation for Nhan to continue his dream.

Almost eight years has passed since his departure from Ba Ria-Vung Tau to return to his hometown, Nhan now enjoys a blissful family life.

His wife was trained in business, but she also quit her job in an industrial zone and joined her husband on the farm.

Nhan’s mother and mother-in-law no longer object to his ideal, frequently visiting his farm and helping take care of the plants.

Interestingly, one of Nhan’s friends in Da Nang also left the urban area for a country house next to Nhan’s place.

“My children hang out with him every single day,” Nhan said.

“They feed from the farm and play with the plants, the insects. They experience the kind of childhood that I had.

"I am recruiting more academics and local farmers.

"I plan to show them the way I am going."