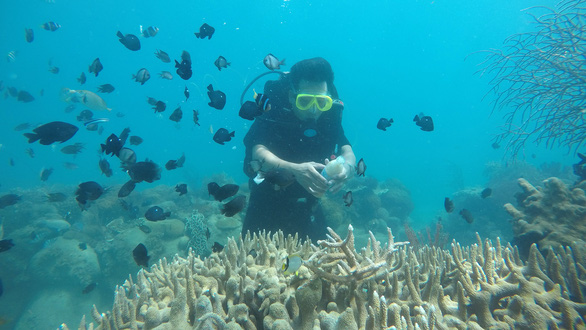 Nguyen Thuy Vu and his team are not afraid of failing and are willing to give it a go in their race to cushion coral reefs on Phu Quoc Island, a retreat off Kien Giang Province, from human impact and climate change and even transplant them for tourism purposes.

Phu Quoc is home to 500 hectares of coral reef that boast 250 different species of coral, according to survey statistics.

The island’s coral reef ecosystem has seen deterioration in recent years due to the warming of coastal seawater as well as the booming tourist industry and fishing activities.

Marine experts have been transplanting corals in swathes of sea surrounding the island, off the southern Vietnamese coast, in an attempt to revitalize its coral population.

When marine buffs put their heads together

Slivers of sunlight reveal a garden of corals which a group of young Vietnamese marine enthusiasts have been building on Phu Quoc seabeds.

Back in the summer of 2019, the group went all the way to meet Nguyen Van Tien, a retired deep-sea diver in the locality, nicknamed ‘Pearl Island.'

Tien is widely known for holding the ‘keys’ to the island’s enigmatic underwater world.

Among the secrets that Tien has always held dear to his heart are coordinates on the location of centuries-old shipwrecks, elusive dwarf lantern sharks (Etmopterus perryi), and coral caverns.

During a dive in 2019, Tien took his new non-resident friends to a coral reef sandwiched between two islands off Phu Quoc City’s An Thoi Ward.

The bewitching underwater spectacle held even seasonal divers in awe.

“I was just overwhelmed. The coral reef here is splendid!” Nguyen Thuy Vu, one of the team members, recalled his first dive with Tien.

With a master’s degree in business administration from Singapore, the 29-year-old began turning his attention to marine conservation after joining a project on impacts of plastic waste on the marine ecosystem.

Eager to see the reefs flourish, Vu decided marine conservation would be his career after obtaining an international diving certificate.

Vu shared his devotion to coral reefs in different areas along Vietnam’s coastline is not only a way to satisfy his passion but also his move forward to marine sustainability and the source of stability for their communities.

He has good reasons for doing so.

“Wildfires are generally high-profile incidents of which causes and catalysts are easily identified and culprits are held accountable,” he explained.

“But similar detrimental incidents on the seafloor tend to slip unnoticed though they cause irreversible harm to and even wipe out underwater forests.”

Well aware of how significant corals are in supporting high levels of biodiversity and even human life, many nations spend millions of U.S. dollars each year on conserving coral reefs, Vu said.

The dive with Tien prompted Vu to extend his stay in Phu Quoc, where the man, hailing from Lam Dong Province in the Central Highlands, found himself making scuba diving trips all over the island during the several following months.

Altogether they make a breathtaking spectacle and offer a one-of-a-kind appeal.

Sea enthusiasts’ short-lived excitement is overshadowed by disappointment and concern, however, Vu noted.

He added he began to notice signs of bleaching in several coral reefs which would finally result in the decline of coral cover.

The tell-tale signs come when the creatures showcase their rainbow of sparkling colors.

"It’s like a girl with her cheeks blushing from high temperatures.

"She may run into trouble without proper medical care."

After these ‘showtimes,’ a colorful, energy-producing organism will flee the reef, leaving behind a colorless, 'bleached' coral skeleton with no substantial way of producing its own energy.

Without emergency treatment, the corals will wither and die.

Phu Quoc seabeds are no stranger to such coral bleaching incidents.

There are times when nearly 80 percent of its corals died within a single year.

According to experts, ocean warming trends of recent history have only accelerated coral bleaching events.

Seawater in Phu Quoc can rise to 28 or 30 degrees Celsius from January to March each year, whereas corals generally thrive in water with a temperature of less than 24 degrees Celsius.

“Located near the equator, the island often sees its corals ravaged by rising temperatures and global warming,” Vu stressed.

“A myriad of other disturbances and pressures are leading to widespread coral loss and degradation of reef ecosystems," Vu noted.

Despite no background training in marine conservation, the man has gained traction for successfully saving corals in Nha Trang, a beach city in the south-central province of Khanh Hoa, by using seaweed to regulate seawater temperatures.

Rebuilding for the future

Something must be done. As ocean temperatures warm due to climate change and human development and pressures continue nearly unabated, researchers speculate that coral reefs may not be able to survive without active restoration.

Aware there may be ways to lessen the impacts on coral reefs and keen to showcase the beauty of the island’s creatures, Vu and his team began construction work on a coral park on the seafloor of Hon Thom Islet, tucked away to the south of Phu Quoc.

The park, which finished construction after only 65 days, is the fruit of Vu and his team, who worked non-stop and channeled their energy and efforts into technically demanding phases, including collecting broken pieces of coral and re-planting them in the seafloor, building an underwater incubator, reviving corals right from fossilized ones, and protecting the sensitive creatures from coral-eating shellfish which suck the color and life out of them.

Vu shared he has successfully decoded the chemistry and co-existence of other fauna and flora populations alongside corals in a bid to foster a healthy ecosystem.

The team’s efforts have paid off, as the corals are recovering and growing back steadily while showing remarkable resilience to changing ocean conditions.

Divers have to work hard these days to keep the complex’s underwater environment clean and ensure sand is not piled onto corals, endangering their lives.

“We offer coral diving services in a way that tourism can be coupled with conservation efforts,” Dan said.

“Our aim is to highlight the beauty of corals to tourists and raise their awareness of how their daily activities can impact the marine ecosystem.”

Vu will continue to forge ahead with more underwater forests across Phu Quoc and plans to join hands with Tien, the retired veteran diver, to work on a ‘coral center.'

His offer met with Tien’s enthusiasm when the latter revealed he has coordinates of a magnificent underwater cave, where corals and marine life are cushioned from human impact until now.

Globalization on the seabed

According to local divers, sea winds often carry with them all sorts of waste with languages other than Vietnamese and the rubbish ends up in the underwater coral forests.

“Globalization is not restricted to land environments,” Vu noted.

Vu believes he and his team are not alone in building submerged forests.

“Many remain unaware of the vital role played by underwater forests in life on the planet,” Vu noted, adding though corals cover only one percent of the ocean floor, their impact is felt on up to 75 percent of marine life and essential to the survival of 25 percent of sea fish.