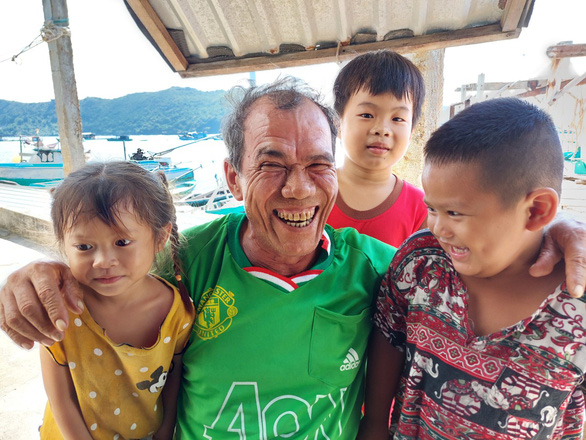 Hai My, who has been adopted by numerous Vietnamese families, spent decades looking for his blood parents. Unfortunately, his search came to an end after his second stroke. Now, his life is surrounded by the love and care of people on an island of divers in the south of Vietnam.

Hon Roi, or Roi Island, belonging to Kien Giang Province is widely known in the southern sea as the territory of marine divers.

The inhabitants on this island are used to seeing tourists coming and going.

However, a white man living on it was enough to catch everybody’s attention.

Hai My, often known as ‘the American’, speaks Vietnamese with a local accent and collects cashew nuts around the island for sale.

Talking to local police officers, the Western man confided that he was illiterate.

He could not give any details about his hometown, parents or his own identity.

“To tell the truth, what you ask me is what I want to ask myself,” he told the officers.

The man spent years tracing his origin, but in vain.

Taking the advice of one of his foster fathers in Long Xuyen City, An Giang Province, he visited a pagoda in Sa Dec Town in Dong Thap Province, where he could possibly find the answer.

The Buddhist monk recognized the white-skinned boy that she took in a long time ago.

However, all she knew was that Hai My was adopted by another monk, who is now dead, during his missionary trip to the Central Highlands.

“They said I had a twin. We were in the trash bin after birth,” Hai My said.

“I was bitten by ants all over my body, but I survived. My twin brother did not make it.”

The compassionate monk took the baby in and healed him in the pagoda.

Later on, the monk had to entrust the boy with his niece-in-law in My Tho City, Tien Giang Province, due to his failing health.

The niece’s husband, however, died in a battle not long after, so she took the baby to a bus station and gave him away.

Sol, a bus line owner in Thot Not District of Can Tho City, welcomed the little boy. However, this man was imprisoned for causing a fatal road accident soon after.

His wife, in turn, sent the baby to a friend in An Giang’s Long Xuyen City.

One day, the father basically sold him to Bay Trong, a fish sauce dealer, as a means to pay off his family’s debts.

Bay Trong quit his trade and started agricultural work on a field located north of the island.

When the boy turned 14, Bay Trong gave him away to Ba Cua in the south of the island, after which he retreated to the mountains to be a monk.

He told the teenager: “I’m going to the pagoda for good. It’s a tough life, so you shouldn’t join me.”

“Stay with Tu Ho and make a business for yourself later.”

A healthy, hard-working boy, Hai My won the affection of Tu Ho and his wife.

Sadly, this man was involved in a criminal case three years later.

From his prison cell, Tu Ho wrote to his family, telling them to send the boy to a buffalo keeper in Ca Mau Province.

An island of love

After tending buffalos during the flooding season in Ca Mau Province, the American came back to Hon Son, where he basked in the overflowing affection of the island people.

“When I got back here, a lot of families told me to stay with them in their houses,” he said.

Seafarers often picked him to work for them as he was a well-built, diligent and honest person.

Hai My was able to travel all over the island because of his work.

At the age of 18, Hai My met Minh, a diver in Hon Roi. The two became sworn brothers and the American was properly introduced to Tu Ky, Minh’s father, and became his foster child.

They arranged for him a certificate of birth and a full name.

The white boy decided to name himself Pham Ba Phuoc, after a person who once helped him out in his difficult times in Hon Son.

The locals on Hon Roi were not aware of this name. They call him Hai My because this name reflects his story in their minds.

Hai, in the Vietnamese language, means the sea – where the local people met him. My, on the other hand, means American.

Living amongst the divers of the island, Hai My himself began diving for work in the deep blue water.

His daily work involves scuba diving to look for pearls and clams.

With so many divers at work using simple tools, Hon Roi became known as the island of ‘aquamen’.

But these ‘aquamen’ are prone to occasional accidents.

Every time somebody gets hurt or comes down with a sickness, Hai My puts aside all of his ongoing work and offers to help the person in need.

He is like a family member to all the households here.

Without a wife, Hai My divides his earnings into three segments, one of which he spends for his minimal needs.

Another is for helping those in need and the rest is for his treasure hunt – the passionate journey to find his true parents.

“I just want to know who they are, where they live, whether they are still alive…” he sobbed.

The illiterate man asked others to write on his behalf to the authorities of Kien Giang Province and to the U.S. Consulate General in Ho Chi Minh City.

The letters tell the story of his life and his yearning for a reunion with his parents.

On days when he had to go to Ho Chi Minh City to look after somebody sick, Hai My dropped by the U.S. Consulate General with a glimmer of hope.

“The U.S. Consulate General sent me an invitation for an interview through post twice,” he said.

“I caught a boat, then a coach to Ho Chi Minh City. But it was too late when I got there. I live too far away.”

A helper of others as he was, Hai My had a stroke for the first time while diving and was saved by a fellow diver in the nick of time.

This came as a side effect of years working with the scuba diving tools in deep water.

The whole island donated for his medical expenses.

Having fully recovered, he immediately paid his former foster father in Long Xuyen City a visit, hoping to get more information about his origin.

It was not a fruitful trip, though.

Some time after he came back to the island, he suffered a second stroke, and was fortunately spotted by a sea goer who was bringing him some fish for lunch.

Once again, his neighbors took great care of him.

“After two escapes from death, I know where I belong,” he said.

Now over 50 years old, it would be impossible for him to move to another country with his parents even if he found them.

He would rather spend the rest of his life in the midst of the island family he found.