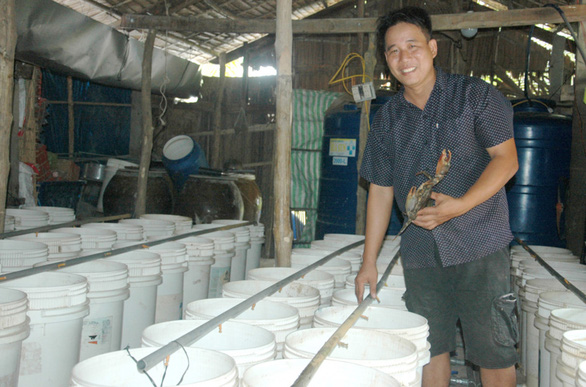 A Vietnamese teacher from the Mekong Delta region is making waves in the seafood industry thanks to his innovative way of producing soft-shell crabs in plastic buckets.

Dao Phuoc Xoan, a teacher at An Thanh Elementary School in An Thanh Commune, Thanh Phu District, Ben Tre Province, has developed a creative way to farm crabs in plastic buckets that he hopes will revolutionize the seafood industry.

Crab farming is not Xoan’s first foray into the seafood industry.

In 2020, Xoan was awarded the prestigious Luong Dinh Cua prize by the Central Committee of the Ho Chi Minh Communist Youth Union for his smart shrimp farming model.

That success encouraged him to look at sustainable ways to farm other sea creatures.

“The soft-shell crabs that Xoan raises taste just like the wild-caught crustaceans," said Dao Phuoc Ngoc, a crab seller at An Thanh Market.

"So many people have ordered his crabs through us that we have run out of stock.”

In Ben Tre, markets such as An Thanh, Thanh Hai, and Thanh Phong are known for their variety of crabs.

Typically, the crabs at these markets weigh 200-250 grams each and are often hollow.

Some, however, have higher meat densities but are difficult to sell at higher prices due to their low weights.

“It was such a waste to consume large-sized crabs so I wanted to find a way to raise them that would bring about better quality and higher profits,” Xoan explained.

The crab-farming method Xoan developed includes filling dozens of plastic buckets with water and keeping them in the shade to prevent algae growth.

The buckets are then connected through a system of plastic pipes which carry salt water between them.

It took several tries and two years to work at all the kinks in the system.

One of these obstacles was keeping pathogens from infecting the crabs in each bucket connected to the system.

Another issue was ensuring that the crabs he sourced had not been processed using borax – a chemical which greatly diminished the chances of the crustacean’s survival in his buckets.

“In the first year, I lost a lot of money and I failed many times,” Xoan revealed.

Eventually, he modified his bucket system and installed a lever that allowed him to manually adjust the amount of water in each bucket.

He also started ensuring the water in each bucket was sterile.

The teacher began experimenting with the exact kind of seawater he used in his farming process.

For example, at first, he used seawater collected close to shore that had a salinity level below five grams per liter, but this produced an unaesthetic shell color.

He then began collecting water from further out that had a salinity reading of 10-15 grams a liter and a pH level from 7.5 to 8.

After the water was collected, he spent 15 days sterilizing it before adding enough calcium to ensure that the crabs would have hardened shells in just ten days.

Xoan’s method produced crabs that were full of meat but, unfortunately, these crabs were not particularly profitable.

His solution to this problem was to produce soft-shell crabs instead.

He began producing the soft-shell crabs by placing four quarter-kilogram baby crabs in each bucket.

With 60 buckets in his care, he is able to produce about 240 grown soft-shell crabs every 45 days.

Each of his grown soft-shell crabs weighs 1.2-1.3 kilograms.

Over the past few years, Xoan has become an expert on crabs.

For crabs with a broken shell or that are unable to eat, he wraps them in cloth and freezes them.

When he unthaws them several months later, they taste the same as those found in nature.

Aside from producing soft-shell crabs, Xoan farms crabs with a large amount of fat.

“They tend to stay still and do not fight.

"I try to make sure all the baby crabs I use are of similar size so they don’t fight for food.

“[My farming method] is a success.

“I want to share my idea so others can raise crabs this way and earn some money for their families."