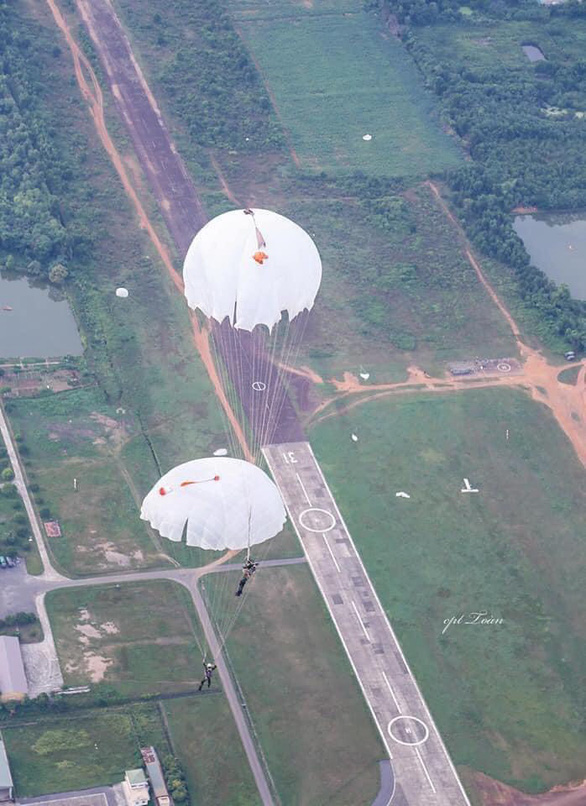 Jump in! Parachuting a hit amongst young women in Vietnam

Young women from northern Vietnam are jumping into a new hobby: parachuting.

Parachuting is similar to skydiving, though the primary difference lies in that parachutists spend minimal time in freefall.

At Vietnam’s Northern Aviation Club, these jumps are guided by professional soldiers.

Bui Thanh Dung, a resident of Hanoi, is one of the many young Vietnamese who are drawn to the sport.

Despite her intense fear of heights, Dung is hooked on the adrenaline of floating through the skies.

A fear of heights

“I love extreme sports and wanted to conquer my fear of heights, so I decided to take a parachuting training course.

“I have also tried paragliding,” said Dung, a current trainee at the Northern Aviation Club, adding that she is one of many young women in her training course.

Parachute season in Vietnam typically starts in April and trainees must pass both a medical checkup and a 12-session training course before being eligible to parachuting.

“Jumps happen so fast. There are only one or two seconds between each parachutist jumping.

“There is no time to feel scared,” Dung said.

Parachutists only have three seconds after jumping to deploy their chute, otherwise an ancillary chute is automatically activated.

“If everything goes well, the chute brings me down safely and slowly,” explained Dung.

“After opening my parachute, I simply admire the landscape.

A passion for parachuting

Thai Thuy Linh, a 20-year-old who is also learning to parachute at the Northern Aviation Club, shared that she had never even been in a plane before the course, but was determined to give parachuting a shot.

“The feeling of jumping from an aircraft and free falling was like a dream come true,” she said.

During her three-month course, Linh made two solo parachute jumps alone, but each of those jumps had a rough landing.

“I hurt my legs during the first jump and landed in a lake during the second jump,” Linh shared.

Floating through the air

According to Linh, parachuting is a great way to relieve stress and make new friends.

“Floating through the air makes me relaxed, comfortable, and energetic. The most important thing I have learned from parachuting is how to step out of my comfort zone and conquer my fear of heights,” Dung said.

Lieutenant Nguyen Ngoc Tan, Dung and Linh’s instructor, said that the club opens its training course each year from March to July.

The classroom lessons are held in Gia Lam District, Hanoi and the parachute jumps take place at Hoa Lac Airport.

Everyone who joins the Northern Aviation Club’s parachuting course has their own reasons for joining.

Some have a passion for extreme sports, some hope to overcome a fear of heights, and others just want to try something new.

“The training methods for men and women are similar. Most learners are full of passion and have high a dedication to learning,” Lieutenant Tan said.

After finishing a course, learners can register to parachute at the Chu Lai Airport in Quang Nam Province, the Tuy Hoa Airport in Phu Yen Province and the Bien Hoa Airport in Dong Nai Province in April, May, and June in line with schedules set by the Army Air Defense and Air Force.

Each parachuting training course hosts 50 to 55 learners. They are instructed on how to use the D6 parachute for their jump.

To be considered eligible for a parachute jump, learners must pass a skills examination that focuses on the procedures to jump out of a plane, problem solving in the air, and landing.

Before performing a parachute jump, trainees have blood pressure measured, check their chutes, and do warm-up exercises.

Instructors also drop a sand bag out of the plane to determine the direction of wind and the time of a fall before allowing their learners to parachute.