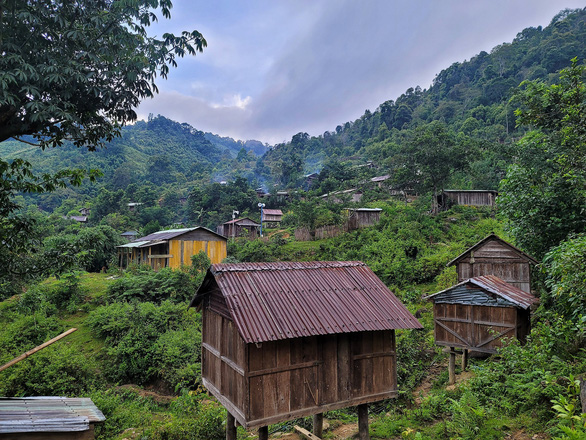 Over 1,000 people from 238 households in Tra Vinh Commune's Village 3 in Nam Tra District, Quang Nam Province, central Vietnam have endured a rough life on the hillside for years due to the authorities’ unresolved conflict regarding overlapping geographical boundaries.

The total area of the overlapping land between Kon Tum Province and Quang Nam Province is nearly 6,200 hectares, with the length of the whole route running through it at over 10 kilometers.

This problem has lasted for years, but the two provinces have yet to agree on a solution, resulting in the precarious survival of over 1,000 people on the hillside.

They long for fundamental infrastructures similar to those in other villages, including electricity, a road system, schools, markets, and telecommunication services.

Where there is no light

“A well-off family can buy their own water-powered electricity generator and place it at the top of the stream [that runs through the village]. But for the less able, they often team up in groups of three to four families,” said Ho Van Thong, a villager there.

“If the light goes out in one family, the others will be in darkness, too.

“The electricity produced is in small quantities, just enough for charging phones and keeping lights on.

“To use the TV set, you have to turn off the light, and vice versa.”

It is a mere 20-kilometer eastward journey from the center of Dak Nen Ward in Kon Plong District, Kon Tum Province, but it takes two hours to get to this village due to the sloppy road full of cracks and heavy bumps.

There are overflowing dams, powerful streams, and makeshift hanging bridges.

At times, travelers will have to push their motorbikes up a rocky cliff.

A few children are seen peeling some pomelos they have just picked near the stream, with their dirty faces, bodily scratches, and barely any clothing.

Under the afternoon shower, the adults return home after a hard day working in the field, trying to make ends meet.

Thong and his wife live in a darkly lit wooden house.

They can identify the difficulties due to the overlapping boundaries that their neighborhood unfortunately gets stuck in.

This family used to burn wood logs for light.

In the evening, the whole of Village 3 is buried in darkness, with flickering light from the fireplaces.

The secluded lives of these people for years have remained unchanged.

According to him, villagers there have always lived like this.

They even have to clear the paths to make their own roads and build their own hanging bridges from natural materials.

Their place is only accessible by foot, which is extremely exhausting.

A few household owners were able to purchase motorbikes in 2008, but the challenging road system did not spare them.

“The roads and the bridges were spontaneously created by the people here, so they are of low quality and can cause damage to the vehicles," said Dieu.

“The only telephone signal spot is on top of the hill.

“Whoever needs to make a phone call will have to climb all the way up this hill, but the signal is not so good. It can be okay during the dry season, but for the rainy season braving this hill is a big deal.”

The only occasion when these villagers will travel far to get hold of basic necessities for sale is in time of a ceremony, be it a wedding, a funeral or a death anniversary.

Most of their meals are based on foraged foods like bamboo shoots and wild plants.

High hopes for their children’s education

The correspondents from Tuoi Tre (Youth) newspaper braved the slippery slopes, flights of steps, and protruding branches in order to get to the highest house in the village.

The most valuable objects in this house are the pots and the weary kitchen lights, blackened due to smoke from burnt wood.

Nguyen Thanh Chim, head of Village 3 of Tra Vinh Commune, said that the unresolved overlapping boundary dispute between Kon Tum Province and Quang Nam Province has led to insufficient investments in infrastructures there.

“Everything is difficult around here. Everything is lacking, especially a road for traveling, transporting goods, doing business, and taking children to school,” said Chim. “Most people here don’t have a motorbike and have to walk all day with a basket on their back to the more crowded areas to sell whatever products they have.”

“They told us to move into Kon Tum Province altogether, but we cannot leave this land as we have lived here for generations," said Ho Thi Phien, a 53-year-old of Village 3.

“Our ancestors rest here, and all of our neighbors and relatives are in Tra Vinh Ward.

“We hope that the authorities of the two provinces will soon settle their disputes so that we can have a more stable life.”

A note from the authorities

Regarding the overlapping land dispute, Tran Van Minh, chairman of the People’s Committee of Dak Nen Ward, said that the two provinces recently had a meeting to resolve this conflict.

The Quang Nam representatives proposed transferring the land of Village 3 to their ownership, while the Kon Tum officials also offered to relocate the 238 households to Kon Tum Province.

Alternatively, they would exchange an equivalent area of land if Kon Tum agrees to surrender the overlapping area.

However, there has been no agreement.

"The commune officials still maintain their original statement that the administrative boundaries have to remain unchanged because the arable land and forest land are in the interests of the people,” Minh said.

“Moreover, the people in the commune are short of productive land. If they are to be relocated, they will lose this and forest resources, and the forest environmental services will also be gone.

“As the two parties disagree, the people bear the brunt. The Departments of Home Affairs of the two provinces will develop a plan. They will measure the area and organize an official meeting with the local people."

Since 2008, the two provinces have held many meetings but have not yet agreed on a solution, causing hundreds of households in this area to face many difficulties.

Because one side manages the people while the other is in charge of the land, the investment in infrastructures in this area is still problematic.

On the Quang Nam side, Nguyen Cong Ta, secretary of the Party Committee of Tra Vinh Commune, said that people in the overlapping area want to continue to work and live on their forefathers' land.

"Whatever you do, you must respect people's opinions. We hope that the leaders of the two provinces have a plan to propose to the central government to resolve this problem soon so that the people will no longer suffer," said Ta.