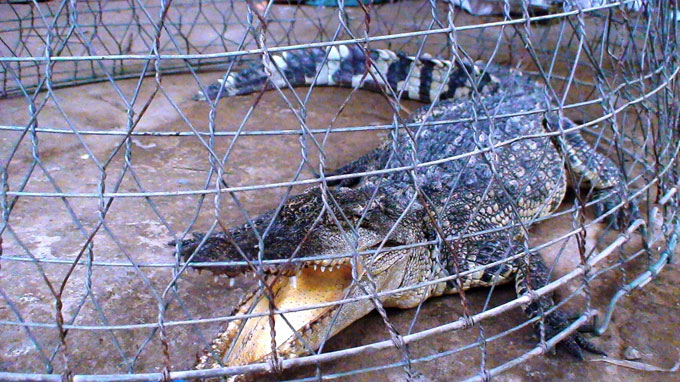 A resident in Cu Chi district on the outskirts of Ho Chi Minh City caught a 20kg crocodile when he was cutting grass on January 4.

The reptile is now being kept in a cage at the house of 33-year-old Nguyen Van Cuong in Cu Chi’s Trung An commune.

‘‘I saw two crocodiles swimming in a small canal near Ba Huyen bridge. I tried to catch them using electricity-transmitting sticks. But I was only able to catch the smaller one while the bigger one escaped”, said Cuong.

After the crocodile was caught, a man, who claimed to be an employee from a local crocodile farm, came to Cuong’s house wanting to buy it for VND600,000 (roughly US$30) but Cuong refused to sell.

A resident living nearby told Tuoi Tre that crocodiles had been caught in that area before.

Vo Van Minh, chairman of Trung An’s People’s Committee, on Tuesday confirmed that they will investigate this case further and will determine if the crocodile had escaped from a local farm or not.

A Louisiana man flying to California woke up on a dark, empty plane parked at Bush Intercontinental Airport in Houston after sleeping through the call to exit the aircraft

Cartoon: When can we travel by metro in Ho Chi Minh City?

In the years to come

A 42kg manioc tuberous root shaped like a deer lying on its abdomen was dug up by a local in central Thua Thien Hue province.

California on Tuesday approved a law which will prevent paparazzi from using drones to take photos of celebrities, among a series of measures aimed at tightening protection of privacy