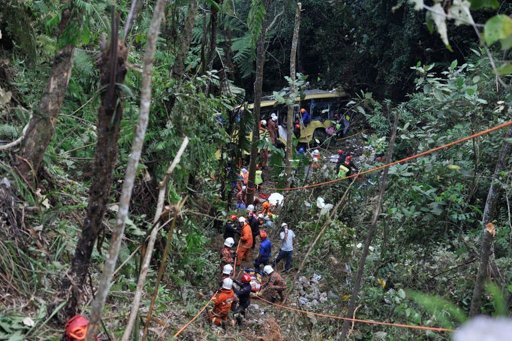 At least 37 people are confirmed dead after a bus tumbled into a deep Malaysian ravine Wednesday in the country's worst-ever road accident, an official said.

The toll could climb however, as 16 other passengers were injured, with hospitals reporting some in critical condition.

Authorities said the bus was carrying 53 passengers when it went off a swerving road and plunged down a steep 70-metre (200-foot) slope in the Genting Highlands, famed for a flashy gambling and entertainment resort about an hour's drive from the capital Kuala Lumpur.

"Thirty-seven are dead -- 13 women and 24 men," Christopher Chong, a fire official at the scene, told AFP by phone.

Chong said the bus was heading downhill when the driver apparently lost control on a bend in the road.

Reports said most of the passengers were Malaysians, but staff at the Hospital Kuala Lumpur said the injured brought there after the crash also included a Thai man and a Bangladeshi man.

Lines of rescuers clinging to an orange rope for support were seen pulling injured victims out of the bus shortly after the accident, which occurred around 3 p.m.

The bus was lying on its side in thick vegetation.

The rugged terrain forced rescuers to rig up an improvised pulley system to raise bodies and injured victims in a time-consuming operation, media reports said.

Police said the bus was part of a regular line that ferries visitors between the capital and the hill resort.

The resort, whose bright lights can be seen from the city at night, is operated by Malaysian gaming firm Genting, one of the country's largest companies.

It is currently undergoing a reportedly three billion ringgit ($900 million) refurbishment that includes a Twentieth Century Fox theme park set to open in 2016.

The road leading up the Genting Highlands, however, is notoriously steep and winding.

Two Indian tourists died and 22 other people were hurt when their bus overturned in the area last year.

The toll in Wednesday's accident makes it the country's deadliest road transport tragedy ever.

Previously, Malaysia's worst such accident was a similar tragedy in the Cameron Highlands, another hill resort area, that took 27 lives. All the passengers were Thai.

Muslim-majority Malaysia has banned gambling but allows non-Muslims to bet at the casino in the Genting Highlands, as well as on horse-racing and private lotteries.