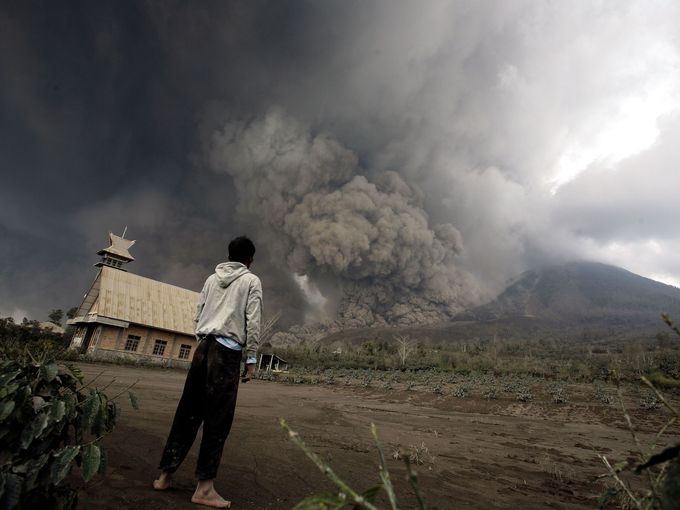 KARO, February 2, 2014 (AFP) - Indonesian officials searched through thick ash for bodies Sunday after Mount Sinabung volcano erupted, killing at least 15 people, with the only sign of life an ownerless mobile phone ringing inside an abandoned bag.

Scorching clouds engulfed victims during the eruption on Saturday, leaving rescuers with little hope of finding survivors as they searched through ash up to 30 centimetres (12 inches) thick.

About 170 people, including from the military and police, armed with chainsaws and oxygen apparatus spread out through apocalyptic-like destruction in Sukameriah village, officials said.

Sukameriah, just 2.7 kilometres (1.7 miles) from Sinabung's crater, is located in the "red zone" around the volcano, where human activities are strictly banned, disaster official Tri Budiarto said. Residents had been evacuated.

"It's very dangerous and completely out of bounds. But many of the tourists still secretly went to the area to take photographs," Budiarto added.

"There's no sign of human life. All the crops were gone. Many houses were damaged and those still standing were covered in thick white ash. It was hard to walk in ash which nearly reached my calves," Gito, who like many Indonesians goes by one name, told AFP.

"We didn't find bodies but we picked up a bag belonging to one of the victims. The cellphone was ringing," he added.

Sutopo Purwo Nugroho, the spokesman for the National Disaster Management Agency, was unable to put a figure to the number of people still missing, but said there was a "chance" that the death toll might rise.

"A body was spotted near a tree, but we have yet to evacuate (it)," he said.

"I doubt it would be possible for anyone to survive the heat clouds yesterday. So far, we have not found any more bodies," said Lieutenant Colonel Asep Sukarna, who led the search operation.

The volcano on the western island of Sumatra started erupting in September, but on Saturday spewed hot rocks and ash 2,000 metres (16,00 feet) into the air, blanketing the surrounding countryside with grey dust.

Fourteen people -- mainly local tourists, including four high school students on a sightseeing trip -- were killed by lethal heat clouds which cascaded down the volcano.

A 24-year-old man who was accompanying his father to pay respects at the graves of their relatives died from his injuries early Sunday, raising the death toll to 15, Nugroho said.

Two other people are being treated for serious burns at a local hospital.

"It's cloudy today so we worry that it might rain," Karo district spokesman Robert Peranginangin said. "If it rains, the area will be muddy and hard to walk, so we will have to stop search and rescue."

Officials are also putting up more signs to warn people not to enter the area, officials said.

Mount Sinabung is one of 129 active volcanoes in Indonesia that straddle major tectonic fault lines, known as the Pacific Ring of Fire.

The country's most active volcano, Mount Merapi in central Java, killed more than 350 people in a series of eruptions in 2010.