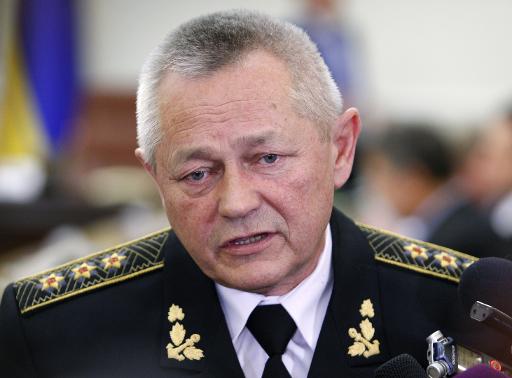 Kiev — Ukraine's parliament sacked the crisis-hit country's besieged defence minister Tuesday after his forces began a humiliating withdrawal from Crimea without firing a shot against Russian forces who claimed the Black Sea peninsula.

Crimea's effective loss -- though recognised by no Western power -- has dealt a heavy psychological blow to many Ukrainians who have already spent the past years mired in corruption and economic malaise.

Some 228 deputies in the 450-seat Verkhovna Rada parliament supported Igor Tenyukh's dismissal after the acting defence minister tendered his resignation in an emotional address broadcast live across the nation of 46 million people.

"It seems that the actions of the interim defence minister in the Autonomous Republic of Crimea... has displeased some," said Tenyukh.

Deputies then quickly voted to appoint Lieutenant General Mykhailo Koval as the new acting defence minister after his name was submitted for approval by interim President Oleksandr Turchynov.

"We gave up Crimea to the Russians thanks to our unprofessionalism," independent lawmaker Igor Palytsya fumed.

"We gave up Crimea thanks to our indecision."

Western leaders sought to ward off any such threat by forging a more forceful response in The Hague after two rounds of only targeted sanctions that hit only specific officials but left Russia's broader economy untouched.

A summit of the Group of Seven most industrialised countries agreed on Monday to deepen Moscow's isolation over the crisis and meet on their own -- without Russia -- in Brussels instead of gathering in Sochi in June.

"We're united in imposing a cost on Russia for its actions so far," US President Barack Obama said in reference to the travel bans and asset freezes that Washington imposed on key members of Putin's inner circle last week.

But the Kremlin on Tuesday shrugged off the seven world leaders' decision as "counterproductive" but otherwise harmless.

"When it comes to contacts with the G8 countries, we are ready for them, we have an interest in them," Kremlin spokesman Dmitry Peskov told the ITAR-TASS news agency.

"But the unwillingness of other countries to continue dialogue -- we consider it counterproductive, both for us and for our partners themselves," Putin's spokesman said.

Western powers have been trying to boost Ukraine's fledgling interim leaders by drumming up urgent assistance that can be issued as soon as the International Monetary Fund puts the finishing touches on a new support programme for Kiev.

An IMF team is due to wind up an extended mission to Ukraine on Tuesday and is expected to put the pieces in place for the first money to be issued by the second half of April.

The European Union on March 5 offered to extend up to $15 billion (11 billion euros) to Ukraine while Washington has pledged $1 billion in loan guarantees.

Japan pitched in another $1.5 billion to the Ukraine rescue fund on Tuesday.