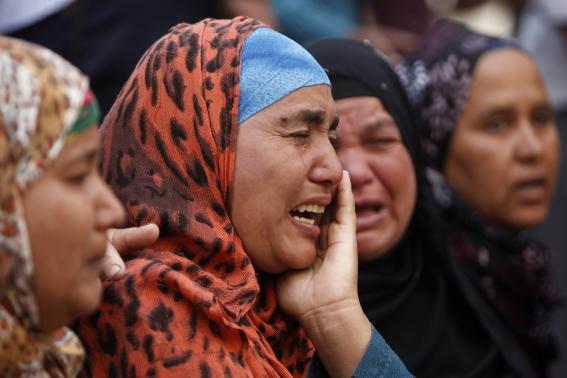 An Egyptian court sentenced the leader of the Muslim Brotherhood and 682 supporters to death on Monday, intensifying a crackdown on the movement that could trigger protests and political violence ahead of an election next month.

In another case signaling growing intolerance of dissent by military-backed authorities, a pro-democracy movement that helped ignite the uprising that toppled autocrat Hosni Mubarak in 2011 was banned by court order, judicial sources said.

The death sentence passed on Mohamed Badie, the Brotherhood's general guide, will infuriate members of the group which has been target of raids, arrests and bans since the army forced President Mohamed Mursi from power in July.

The movement says it is committed to peaceful activism. But some Brotherhood members fear pressure from security forces and the courts could drive some young members to violence against the movement's old enemy the Egyptian state.

Badie was charged with crimes including inciting violence that followed the army overthrow of Mursi, who is also on trial on an array of charges.

In a separate case, the court handed down a final capital punishment ruling for 37 others. The death sentences were part of a final judgment on 529 Muslim Brotherhood supporters sentenced to death last month. The remaining defendants were jailed for life, judicial sources said.

Death sentence recommendations in the case involving Badie will be passed on to Egypt's Mufti, the highest religious authority. His opinion can be ignored by the court.

Mass trials in the biggest Arab state have reinforced fears among human rights groups that the government and anti-Islamist judges are using all levers of power to crush opponents.

"The decisions are possibly the largest possible death sentences in recent world history. While they're exceptional in scale, they're certainly not exceptional in kind," said Sarah Leah Whitson, executive director for Middle East and North Africa at Human Rights Watch.

"It seems that these sentences are aimed at striking fear and terror into the hearts of those who oppose the interim government."

In an early reaction from a Western government, Swedish Foreign Minister Carl Bildt wrote on Twitter that the mass trials were an "outrage". "The world must and will react!"

There have been Western reactions to Egypt's approach to dissent. But it mostly comes in the form of statements, not action.

Egypt's relations with the United States - the source of $1.5 billion in annual aid, most of it to the Egyptian military - have been strained in the three years since the overthrow of Mubarak.

Foreign Minister Nabil Fahmy is currently on an official visit to the United States, describing it as a trip to "redirect relations between Egypt and America".

The United States froze some of its military aid to Egypt last October following Mursi's overthrow and the state's violent crackdown on his supporters.

Last week, Washington said it would deliver 10 attack helicopters to help the government in its fight against Islamist militants in the Sinai Peninsula.

Monday's rulings can be appealed. Many defendants are on the run.

The political turmoil that has gripped Egypt and an Islamist insurgency based in the Sinai have hammered the economy, which grew by a meager 2.1 percent last year.

"In a month, Egypt sentences more people to death than the rest of the world combined. It is not the kind of news to rekindle confidence," Angus Blair, chairman of business and economic forecasting think-tank Signet, wrote on his Twitter feed.

As soon as word spread of the death sentences, relatives of the defendants screamed and cried outside the court in the town of Minya.

Others collapsed on the street as soldiers with AK-47 assault rifles standing on an armored vehicle looked on.

Relatives blamed Abdel Fattah al-Sisi, the general who deposed Mursi. The former head of military intelligence under Mubarak is expected to easily win presidential elections on May 26-27 in a country long ruled by men from the military, Mursi's time in office representing the rare exception.

"Sisi is ruling like a king" and "May God punish you for what you did" some people chanted.

Authorities have extended a crackdown to secular activists.

A ruling on Monday banning the activities of the April 6 movement follows the imprisonment of three of its leading members last year on charges of protesting illegally.

The charges against April 6 included "damaging the image of the state".

Authorities still see the Brotherhood as the most dangerous threat. Egypt's biggest political party until last year, the Brotherhood has been outlawed and driven underground.

It has vowed to bring down the government through protests, despite a security campaign that has weakened a movement believed to have about one million supporters in the nation of 85 million.

Despite decades of repression under one Egyptian ruler after another, the Brotherhood has managed to survive, winning over Egyptians with its social networks and charities.

The judge who handed down the death sentences, Saeed Yousef, has a history of imposing the maximum punishment. In one case, he sentenced someone to 30 years in jail on charges of shoplifting clothes and illegal possession of a knife.

He is not always tough on defendants. Last year, Yousef acquitted a police chief and 10 policemen accused of killing 17 protesters during the revolt that ousted Mubarak.