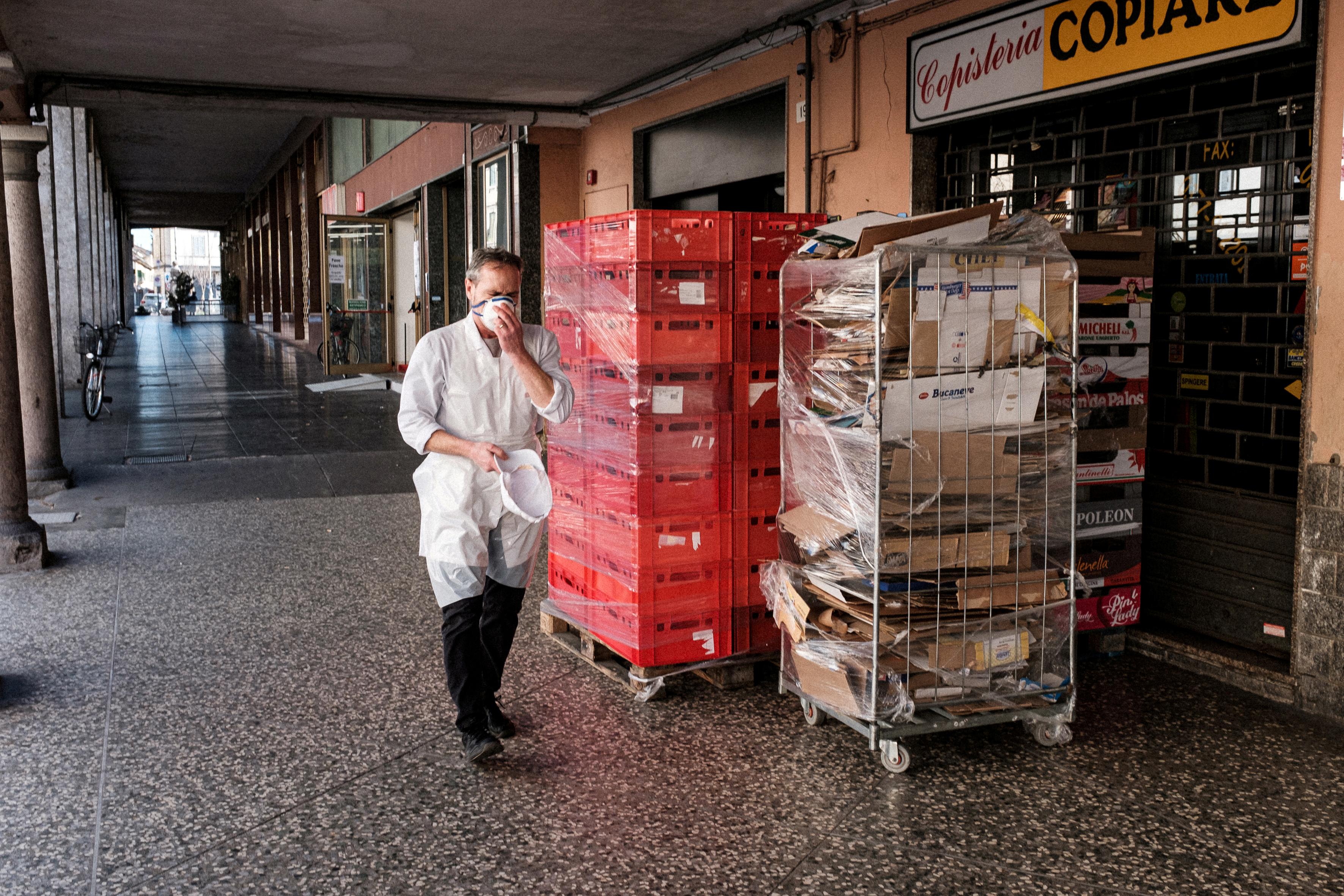 MILAN -- At the epicenter of Europe’s worst outbreak of coronavirus to date, daily lives have taken on an eerie, aimless calm. It’s at night that the worry takes over.

“You can hear the ambulances coming and going, and maybe they’re going to sick people who have nothing to do with the coronavirus but it worries you just the same,” said Davide Benelli from his home in Casalpusterlengo, a town of around 15,000 in Italy’s quarantined “red zone” where the disease broke out a week ago.

People in the zone wake up to closed cafes, restaurants and schools; farmers worry that planting should be starting around now.

Parents try to keep their children amused with games or jobs around the house, or go on bike rides or drives to break the boredom.

As the economic shocks triggered by this paralysis in the country’s northern industrial heartland reverberate across Europe, Italians are still trying to get to grips with how a seemingly isolated case could balloon within days, to bring the eurozone’s third-largest economy to the brink of recession.

Almost 900 coronavirus cases have been confirmed. Authorities have put part of Italy’s most productive region into lockdown, shut the Venice carnival, one of its main tourist events, and postponed Milan’s showpiece design fair.

Lombardy, the region around Italy’s financial capital, Milan, sits on the border with Switzerland and is one of the richest and most productive in Europe.

Along with neighboring Veneto, the other main area hit by the coronavirus outbreak, it generates around a third of Italy’s economic output.

Economists expect the crisis to tip Italy’s already struggling economy into recession by the end of the first quarter, with knock-on effects likely to last for months.

The lockdown, which started on Feb. 23, affects 10 towns in Lombardy and one in Veneto and isolates some 50,000 people from the outside world.

Trucks can get in and out with bare essentials, but police roadblocks keep everyone else in.

Italy’s case reveals how vulnerable a Western economy can be to unexpected outside events.

The red zone and the region around it is a microcosm of the Italian economy.

The area contains everything from warehouses and logistics centers for companies to cheese and dairy processing centers.

Local engineering unions say some 6,000 manufacturing workers, mainly those living in the red zone, have been sent home or put on short hours.

“We are very worried. We’ll have to wait a couple of months for a reliable estimate of the effects on employment ... but the initial signals are alarming,” said Andrea Donega, secretary general of the regional branch of the FIM-CISL union.

Banks are taking steps to ensure people can access cash.

Banco BPM SpA, one of the region’s main banks, has temporarily stopped charging customers from other banks who use its ATMs.

The impact is hurting areas of Italy barely touched by the virus.

Italy’s tourism federation, Assoturismo, said up to 90 percent of hotel and travel agency bookings had been canceled in Rome and up to 80 percent in Sicily for March, as school trips and conferences across the country were called off, and foreigners opted for caution.

“Italian tourism never experienced a crisis on this scale in recent history. This is the darkest moment. Not even 9/11 hit our business so hard,” said Assoturismo chief, Vittorio Messina.

How did it happen?

Italians want to know why their country has become the Wuhan of Europe.

The first two cases in Italy came to light at the end of January when two Chinese tourists from the city that is ground zero of the deadly disease fell ill during a trip to the country.

The couple were immediately put into isolation, everyone they had come into contact with was tested for the virus, and Italy’s government became the first in Europe to ban all direct flights to and from China, in a bid to halt further contagion.

The two Chinese are not believed to have infected anyone else.

“The system of prevention put into place by Italy is the most rigorous in Europe,” Prime Minister Giuseppe Conte told reporters reassuringly on Jan 31.

His confidence was misplaced.

On Feb. 21, Lombardy announced that a 38-year-old Italian man, named only as Mattia, from the town of Codogno, 60 km (40 miles) southeast of Milan, had tested positive for the virus.

Within a week, 888 people were confirmed to have caught the disease, of whom 21 had died.

“We were considered to be the country that had adopted the most drastic and fastest preventative measures,” said Massimo Galli, head of the infectious diseases department at Milan’s Sacco hospital, where some coronavirus patients are being treated.

The illness is spread through the air and can leave some people symptom-free while local authorities say about two in 100 develop fatal complications including pneumonia, making it a stealth killer able to infect thousands without their knowing it.

When Mattia first showed up in the Codogno hospital on Feb. 18, no alarm was raised about his symptoms because he had not been to China, local officials said.

The consequences were dramatic.

After spending time in the emergency room that day, surrounded by other sick patients, he decided to return home, the local health authority said.

But his condition worsened and he was back in hospital the next day with no protection in place.

He was not diagnosed until the night of Feb. 20 and by then he had infected five health workers and at least one fellow patient, besides his pregnant wife and a friend.

They in turn spread the disease before going into quarantine.

A nurse from the hospital told Reuters on Thursday that he suspected the illness had been circulating days before Mattia arrived seeking help.

“For at least a week before the first case was discovered, we had observed an abnormal number of pneumonia cases. All these persons were treated and sent back home,” he said, asking not to be named.

He said confusion reigned in the hours after news broke that Mattia had tested positive.

“As a result, more health workers than patients were infected in Codogno hospital.”

The local health agency responsible for the hospital did not immediately respond to a request for comment.

Prime Minister Conte has accused the hospital of mismanaging the case and contributing to spreading the virus, saying it did not follow the right protocols.

The hospital has said it did, as has Lombardy’s regional government, which oversees the local health service.

It argues that Rome changed its guidelines at the end of January on testing possible coronavirus patients.

The new rules said swabs only had to be taken from people with connections to China — something that did not apply to Mattia.

Prompted by Conte’s complaint, prosecutors have opened an investigation into the procedures followed by the hospital. It may take many weeks before they reach any conclusions.

No one knows who brought the illness to Italy’s wealthy north: Scientists initially believed the unwitting “patient zero” might have been a colleague of the Codogno patient who had recently returned from a business trip in China. But he tested negative, leaving no other obvious candidates.

Dr. Marino Faccini leads a team of experts in Milan who are tasked with trying to find the source of viral outbreaks.

However, after days of plotting possible paths for the infection, he has drawn a blank.

“We are [now] working to limit the virus and not so much looking for patient zero, whose [illness] dates back quite some time and is difficult to locate,” Faccini told Reuters.

The authorities have had to strike a difficult balance between ensuring public safety and trying to prevent panic.

“Only 0.1 percent of the country is involved,” Foreign Minister Luigi Di Maio told reporters on Thursday.

But local authorities say they have had to impose broad restrictions to prevent the spread of contagion, which would overload the health service to the point of collapse.

“If this outbreak spreads, hospitals will face a serious crisis, not only for the coronavirus admissions but for all patients,” the Lombardy regional government said in a statement on Friday.

In the red zone, only strictly necessary services such as supermarkets are open.

School children have been doing homework remotely and communicating with their teachers by WhatsApp.

The economic shockwaves have been felt across the country, in businesses of all sizes.

The area is a rich agricultural producer, with around 500 farms and some 100,000 cattle and pigs.

With planting due now, “everyone should be working flat out,” said Gianpiero Gruppi, who raises pigs and mixed cereal crops in San Rocco al Porto, near Lodi.

Instead, two of his farm workers are in lockdown and he and his brother have been forced to do the work of four on their own.

The only way to get things in and out is to hand them to police on the checkpoints or leave them to be picked up.

Carlo Migli, a dairy farmer near Lodi who has 300 head of dairy cattle, has struggled to get the necessary health checks on milk samples because the nearest testing centers are outside the red zone.

If he can’t get the checks done, he’ll have to throw out daily production of 3,000 liters of milk, he said.

Local producers worry future sales will suffer as buyers shy away, even though the virus does not affect food safety.

Coldiretti, an agricultural lobby group, has already warned that food products from Italy are facing additional sanitary checks in some places.

Carlo Cornali, owner of Pasticceria Cornali, a century-old bakery in Codogno which makes a famous biscuit sold locally and beyond, has had to stop production altogether.

Just ahead of the normally busy Easter season, he has canceled his own orders to suppliers.

“We can’t do anything because the eggs come from outside the red zone,” he said.

“I don’t know when we’re going to open and if we open, what it will be like, because we’ll have to see the effects of this general psychosis.”