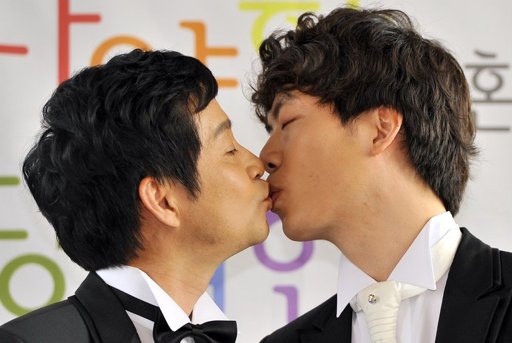 Gay South Korean filmmaker Kim Jho Kwang-Soo announced plans to marry his partner Wednesday and vowed to spearhead a campaign to legalise gay unions in a country that remains deeply conservative over matters of sexual identity.

Dressed in matching tuxedos, Kim, 48, and his partner, Kim Seung-Hwan, 29, publicly kissed for the cameras at a press conference where the director outlined details for their wedding ceremony in Seoul in September.

Homosexuality is not illegal in South Korea, but carries a significant social stigma and there are few openly gay public figures.

Gay marriage is not legally recognised, but Kim said he would still apply for an official certificate after his wedding.

"It will most definitely be denied. But then I will file a constitutional appeal... and I will fight to legalise gay marriage.

"Gay people have rights too and hating people for who they are is wrong," Kim said, adding that he believed attitudes in South Korea were beginning to change.

"In 10 years we could have a gay president or mayor," he said.

Wedding guests in South Korea traditionally offer cash as a gift and Kim said all the money collected at his wedding would be put towards a fund to create the country's first Lesbian Gay Bisexual and Transgender (LGBT) centre.

The filmmaker came out publicly in 2006 during a press conference to present the gay-themed film "No Regrets" for which he was the producer.

In 2008, he wrote and directed his first short film "Boy Meets Boy" and in 2012 set up a production company, "Rainbow Factory," that specialises in gay cinema.

Despite Kim's defiant optimism, South Korea has some way to go in terms of providing a platform for gay culture.

In September last year, a TV channel pulled the plug on a newly-launched talk show aimed at the transgender community, following strong objections from viewers.

One of the presenters of the short-lived "XY That Girl" was Hong Suk-Chon, a comedian and actor and, along with Kim, one of the very few Korean celebrities to live as an openly gay man.

When he first came out more than 10 years ago, there was a swift public backlash and Hong was released from all his contracts and spent a number of years in the professional wilderness.