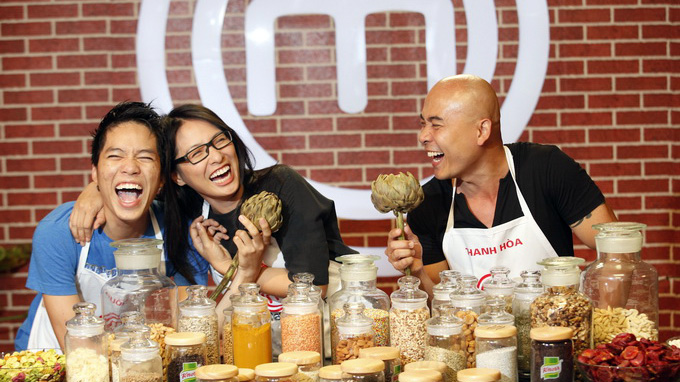 Ngo Thanh Hoa, a Vietnamese-Australian man of few words, who was named winner of the first-season Vietnam Masterchef reality show on July 19, shared that cooking, his greatest passion, helps him gain composure, patience and self-satisfaction.

Hoa, in his early 40s, scaled up the ladder of success with different jobs, including menial ones, like washing the dishes and waiting at tables at restaurants.

Hoa began cooking as early as 6, with his task then being to make a delicious meatless meal with only a pot of well-cooked rice and some nice-looking, boiled fresh vegetables for his family.

At 21, Hoa came to study and work in Australia, where he took different jobs, from washing the dishes to working as a waiter, salesman and designer to work his way through university and earn a Master’s degree in Marketing. He has been back in Vietnam for one year now.

“During my university years in Australia, I didn’t have much money to eat out, so the tips I learned as a kid really helped,” Hoa recalled.

During his years in Australia, though he couldn’t make some Vietnamese dishes such as “mam ruoc” (shrimp paste) as his foreign housemates weren’t used to the smell, he found golden opportunities to get access to various new ingredients and Europeans’ seasoning styles.

The young man then began fusing Asian and European cuisine into his own dishes in an improvisational yet simple way.

In the Vietnam Masterchef’s final on July 19, unlike his competitor, who prepared sophisticated dishes, Hoa chose to make simple ones like “ga xao sa ot” (chicken roasted with citronella and chillies), a common Vietnamese dish, served with Turkish rice and Indian cucumber and yogurt sauce.

Hoa was earlier eliminated in the audition round with a hurtful remark from one of the jury members “I don’t see the cook’s passion in this dish”. Hoa was on the brink of tears when he came forward to ask the jury for a second chance, as he has absolute confidence in his cooking skills and dedication.

When given the second chance, he creatively gathered leftover ingredients to make a new, unique dish only with 30 minutes’ preparation and won the other two judges over.

Now, though busy with his jobs, he always saves time to prepare plain yet tasty dishes for his family, as “cooking relieves me of stress and helps me gain composure and complacency.”

With the VND500 million (US$23,567) prize, Hoa is now dreaming of building a special house, where he relishes in and shares culinary delights with his like-minded friends and clients.