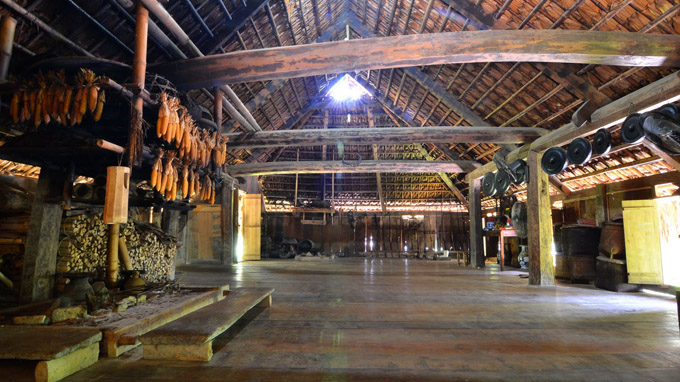 A century-old house on stilts, the last of its kind and the heart of the ancient Muong ethnic culture, in northern Hoa Binh city was burned to the ground in a blaze caused by the negligence of a group of tourists on the evening of Oct 24.

According to the report by the Muong Cultural Space Museum, the Lang house, which belonged to a local official and is being preserved at the museum, was engulfed in flames at around 7pm on Oct 24 after a group of tourists built a fire inside the house to cook corns without asking for permission.

When the flame broke out, the two men and two women, who had arrived in two cars, panicked and didn’t alert or seek help from the museum staff.

They scrambled into their cars and fled and even drove their cars straight at three museum staff when the staff tried to stop them. As the tourists just arrived, they hadn’t registered their identification details, but a staff member managed to jot down one of their license plate numbers.

According to Dinh Thi Phu, the house manager, the over-100-year-old house, which belonged to a Lang official, a member of the loftiest class in the ancient Muong society, was preserved by a local family for several generations before being handed over to the museum.

With only its frame left, over 200 treasured artifacts kept inside the house which reflect the age-old lifestyles including sets of gongs, shotguns, bronze items, potteries, and bamboo and rattan household pieces have been demolished completely.

Though the fire caused no human casualty, it consumed some 90% of the house and resulted in an estimated damage of some dozen billion dong (VND 1 billion is equivalent to US$47,170), and an irreparable loss of cultural heritage.

The investigators are looking into the incident.

The fire and the tourists’ careless, irresponsible attitude have sparked concerns and outrage among the public.