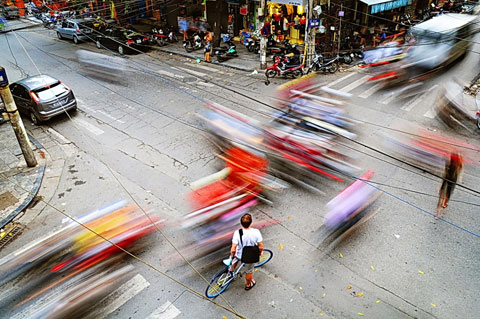 The exhibition features the artworks submitted to the “I love my city” photo competition which was held within the framework of the Year of France in Vietnam.

Besides creating the opportunity for contestants to exchange photography experiences with experts including photographer Nicolas Cornet and Maika Elan, the organizers also confirmed four most outstanding photos which received the highest prize of the competition.

“I love my city” is a photo contest which was organized by Galaxy Publication in collaboration with The French Consulate General in Ho Chi Minh City, The French Embassy in Hanoi and The French Institute in Hanoi.

The competition encourages contestants to create Photo Essay, which means a series of photos telling a meaningful story. It is a chance for people to get to know this type of photography, which is still not popular in Vietnam, according to the organizers.