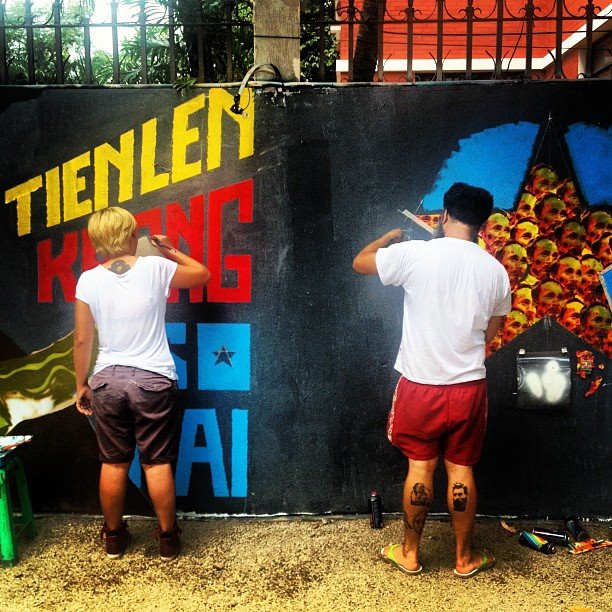 Expats captivated by magic of Saigon

Many foreigners, no matter why or how long they live in Saigon, are captivated by the southern city that provides them with endless artistic inspiration.

Aaron Toronto, an American who has called Saigon (or Ho Chi Minh City, as it is commonly known now) home over the past 10 years, once asked one of his Vietnamese friends how to say “hop dong” (“contract”) in English.

It was not a joke; Aaron actually forgot the word. Smiling, he explained that after 10 years living in Saigon and working various filmmaking jobs, there are times when he completely forgets several common English words.

Many foreigners have chosen Saigon as their muse for artistic inspiration. Those who have left vividly remember their time in the captivating city.

The hues of Saigon

A few years ago, local youths often flocked to Thu Thiem in District 2 to take in some visually striking graffiti by the two French artists Seth and Dem. Their paintings are typically Vietnamese, depicting such images as pretty girls in “ao dai” (traditional long gowns) and “non la” (conical leaf hats).

Similarly, two New Zealand artists who recently arrived in Saigon – Regan Tamanui, or “Ha-Ha,” and Regan Vause, or “Re-Re” – use human faces, slogans, and motorbikes in their highly expressive graffiti.

In his tour across Asia, Tamanui, one of New Zealand’s most influential street artists, picked the Vietnamese southern hub as his long-term destination. He has lived in a container at Saigon Outcast, a popular cultural destination for Saigon youths and expats in District 2’s Thao Dien Ward, since late 2013.

This is where he met Vause, who has lived in Saigon for two years, and initiated the successful Indochina project.

The two like-minded artists then worked together on large murals that depict the Saigonese and their daily lives. They also teach painting to local kids and held an exhibit, “Sketches,” which featured human portraits on “giay nen” (paraffin wax-coated paper).

American artist Kristopher Kotcher also “landed” in the city during his Asian tour. He was instantly hooked by its charm and bursting energy, and set up the Saigon Doodle Club to share his passion for drawing comics and cartoons with local youths.

Yanneth Albornoz is a celebrated artist from Panama who arrived in Saigon in October 2013 for the GoGo City’s GLAM “Live artistic expression” parties. At the parties, guests joined Albornoz in creating large murals while rocking out to upbeat music.

During her stay in Saigon, she created several works, which blend the wild vigor of her Caribbean homeland with Saigon’s vibrant activity.

Michael Waibel and Henning Hilbert of Germany initiated a photo project called “Ho Chi Minh City: Megacity.” The four-month, Goethe Institute-sponsored nonprofit project yielded a book, which illustrates the development of Saigon into the country’s first megacity in photographs and includes annotations and captions in Vietnamese, English, and German.

In a different attempt to retain memories of Saigon, British photographer Rob Whitworth took some 10,000 photos using time-lapse photography and combined them into a video clip, which captures the dizzying traffic of Saigon’s streets and rivers.

“Foreigners in Saigon either love or loathe its traffic. I myself find Saigon to move more strangely than any other city; it is diametrically different from all the places I’ve been to. So I wanted to capture and share my moments spent there,” Whitworth shared.

Other expats living in Saigon choose to capture the city with their songs and verse.

Dave, also known as Allo, an Australian writer and photographer, prefers his Vietnamese name “An Du Du” (Eat Papayas) which he has used during his several years in Saigon.

He composed and performed his own Vietnamese song titled “Khong muon an thit cho” (Don’t Wanna Eat Dog Meat), which tells of his immense difficulty in learning the Vietnamese language. Some of his Vietnamese friends told him that to speak Vietnamese well, he has to eat “nuoc mam” (fish sauce) and dog meat. An Du Du has tried fish sauce several times but adamantly said no to dog meat.

He says that locals can understand what he talks about if they are patient enough to listen to his Vietnamese. His command of Vietnamese has slightly improved from his first years in the country.

An Du Du’s song drew thousands of views by local youths on YouTube.

Meanwhile, during a night when electricity was cut and he could not use his computer, Mark Batchelor wrote a poem titled “Ode to Saigon,” which recalls his memories of Saigon: it tells of the city’s time-honored architecture, old motorbikes, and sudden rain showers.

For these foreigners, their time spent in Saigon has become a memorable piece of their lives; as Italian documentary filmmaker Davide Dominici shared before leaving the city for his country after two years living here: “Saigon is a source of unexpected obsessions…”