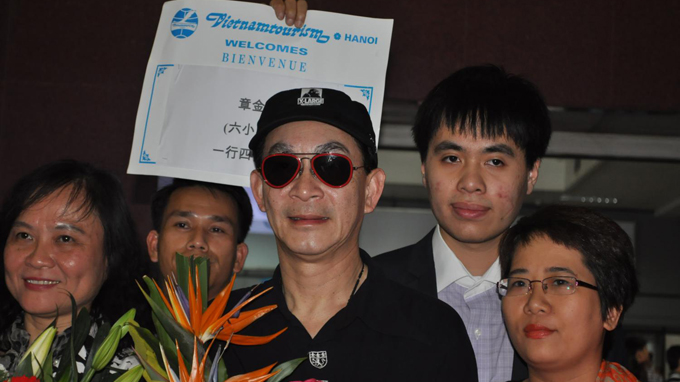 During his five-day trip to Vietnam starting yesterday, veteran Chinese actor Liu Xiao Ling Tong, widely known among Asian countries for his leading role in a classic Buddhist-themed Chinese TV drama, has nominated himself for the Vietnam Tourism Ambassador position.

Liu Xiao Ling Tong, who has made his name for his superb role of the Monkey King in China’s 1986 TV drama “Xi You Ji” (Journey to the West), will run for the position along with three Vietnamese candidates, actress Lan Phuong, 2012 Miss ASEAN Dieu Han and lesser-known English teacher Do Hong Thuan.

The Chinese actor is the first expat ever to nominate himself for the Vietnam Tourism Ambassador race.

According to the regulations released in 2011 by the Ministry of Culture, Sports and Tourism, all law-abiding expats are welcome to nominate themselves for the post, as long as they have a successful career, have expressed their love for Vietnam and made contributions to the country’s tourism.

The new ambassador’s term will likely be two years, one year longer than the previous term. There will be different ambassadors for particular areas and tourism markets.

After actress-businesswoman Ly Nha Ky, the former tourism ambassador and the most promising candidate for last year’s post, withdrew from the race for personal reasons in early 2013, the country’s top tourism officials had trouble picking from the remaining contenders. Last year’s post was thus unfilled.

This is the third time that Liu Xiao Ling Tong has arrived in Vietnam. His first and second visits were in 1998 and 2010.

During this year’s visit, the actor has participated in a host of tourism and cultural activities in Hanoi, including the Vietnam International Travel Mart, which is running at the Giang Vo Exhibition Center at 148 Giang Vo Street, Ba Dinh District until tomorrow. There he performed his signature monkey moves from the drama to the great delight of local fair goers.

His family members have specialized in playing the role of the Monkey King (Sun Wukong), the protagonist in the stage adaptation of the classical novel “Journey to the West”.

The role was handed down to him, after his elder brother died of leukemia. In 1992, China Central Television (CCTV) produced an eight-episode television series titled “Hou Wa” (Monkey child) about his life.

His compelling performance in the drama, which was critically acclaimed and well loved by TV viewers in China, Vietnam and other Asian countries, earned him the Best Actor award at the 6th Golden Eagle Awards in 1988.