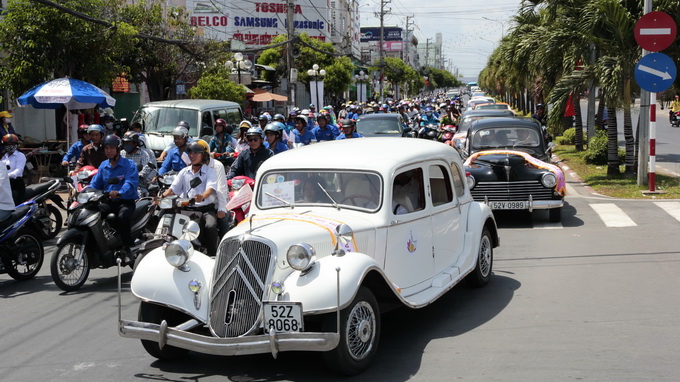 A caravan of vintage cars has added to the appealing activities at the ongoing UNESCO-recognized “Don ca tai tu” (southern traditional music) Festival, which closes next Tuesday in southern Bac Lieu province.

Themed “The connecting journey of cultural heritage”, the caravan comprises of 19 cars which were built in the 1930s and are now owned by the Saigon Volkswagen Vintage Car Club.

The number 19 is indicative of the year when “Da co hoai lang” (Yearning for husband at night), a “don ca tai tu” masterpiece, was created.

It’s also a reminder of the year 1919 when the houses owned by “cong tu Bac Lieu”, affluent young men who are widely known for their wasteful habits, were inaugurated.

After one hour parading on Bac Lieu city’s streets, the caravan stopped at the Commemoration House to southern “Don ca tai tu” and revered composer Cao Van Lau in ward 2.

The group will join more of the festival’s activities and travel to more spots throughout the province to promote the provincial tourism.

The first-ever national festival honoring “Don Ca Tai Tu” (southern traditional music), which was recognized by the UNESCO as an Intangible Cultural Heritage of Humanity late last year, kicked off in Bac Lieu province on Thursday and will go on until next Tuesday.

Themed “Don Ca Tai Tu - The Love of Southern Land and People,” the festival attracts some 350 artists and artisans from 21 southern provinces, and boasts 21 main activities, 14 of which are intended to honor artists and artisans credited with preserving and contributing to the time-honored art.

Bac Lieu is considered one of the “Don Ca Tai Tu” cradles.

Other prominent activities include a meeting between local businesspeople and artists, the launch of the province’s Fund for Preserving and Developing Don Ca Tai Tu, and a workshop on the conservation and development of the long-standing art.

“Don Ca Tai Tu” was recognized as a UNESCO Intangible Cultural Heritage of Humanity in December 2013.

Regarded as one of the country’s main chamber music genres, it stemmed from court music in the central city of Hue and folk music of the southern region.

The genre has been developing since the 19th century, changing along with local taste. It thrived in the early 20th century and remains crucial to the country’s traditional culture.

The time-honored genre is typically performed at festivals, death anniversary rites, and celebrations by farmer artists.

Instrumentalists and singers express their feelings by improvising on 20 principal songs and 72 classical ones. The art has been handed down orally through generations.