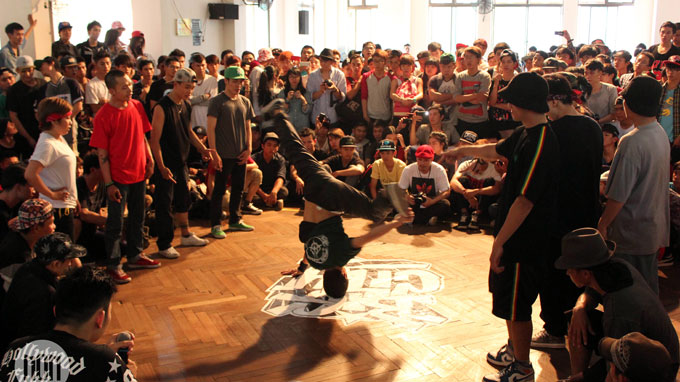 Many youths living, studying, or working in Ho Chi Minh City are going to local art venues to fulfill their need for art and community.

On Sundays, the HCMC Labor and Culture Center (at 55B Nguyen Thi Minh Khai, District 1), is packed with youngsters who compete in and cheer wildly for hip hop “battles.”

Although they are called “battles,” the competitions are not fierce among the contestants, as they compete only for fun.

Ngoc Anh and Bao Quyen, two familiar faces at many such hip hop “battles,” said that although they are both currently in twelfth grade with a lot of schoolwork, they still find time to join the big events where they enjoy the rousing atmosphere.

The girls, who took up hip hop in ninth grade, have both received a scholarship from U.S. schools for the next academic year.

“Our parents usually advise us against indulging in hip hop, as it may interfere with our schoolwork, but we’re set on proving that we can study and practice hip hop at the same time,” Quyen said, still tapping her feet to the stirring music.

This is only one new addition to the growing entertainment options for youth in Vietnam’s southern hub, home to some 10 million people.

Nolza Family, a hip hop group that gathers three times a week at a hall at the Industrial University of Ho Chi Minh City includes members as young as 13.

During their two-hour practice sessions, their only equipment is a cellphone connected to a loudspeaker.

However, their zeal and impressive dance moves often compel passers-by to stop and watch.

Gathering hip hop enthusiasts through Facebook, the group admits new members by having them perform a dance. The group allows newcomers to join if they find their dance satisfactory.

“The group helps us get together with like-minded people and learn from one another. We soon become best friends in real life. This really means a lot to us,” group leader Anh Duy said.

Nolza Family has just finished their video clip “Saigon is Happy,” which features the youth of Ho Chi Minh City dancing in the streets to American singer-songwriter Pharrell Williams’ “Happy.” The group convinced peddlers, “xe om” (motorbike taxi) drivers, and businessmen to dance with them.

The video has drawn a considerable number of views.

Within one year, Saigon Outcast, Zero Station, and most recently Nha Ga 3A (Station 3A), have been launched, providing creative art venues for local young people.

Comprised of three rustic containers once used to transport goods, the space is transformed into a street art haven during events.

Saigon Outcast has held many street art events including a concert featuring reggae music with a Jamaican DJ, an X-games festival, and motorcycle performances.

Visitors can hardly stay still at Saigon Outcast, where music and art are pervasive and a host of alluring activities and festivals – from hip-hop and graffiti to skateboarding – are held on an almost weekly basis.

A recent water festival hosted by Saigon Outcast drew more than 200 youths, who participated in exciting free activities: they fired squirt guns, played with water balloons and on water slides, cooked, and danced with DJs.

“As my friends insisted that I join them, I came to the festival, but tried to stay away from the crowd to avoid being splashed with water. But I jumped right in after being splashed with a whole bucket of ice. It was really fun as we hardly ever play together like this in the city,” shared Natalia, a German student from RMIT University in District 7.

One week before being officially launched, the space attracted many groups of local and international graffiti artists.

Graffiti in a wide variety of fun colors and shapes was painted on the grey walls.

Inspired by famed contemporary art complexes around the world like Soho in New York and 798 in Beijing, Station 3A is comprised of a gallery, studio, clothes shop, charity warehouse, and café.

Activities such as art, flea markets, and art and fashion performances are expected to be held there in the future.

“It was really difficult to find a spot to create graffiti, which Station 3A now offers us. Hopefully the place will continue on a long-term basis,” Hoang Anh, a local graffiti artist, said.

One of the local book forums, bookaholic.vn, provides reviews of books arranged in various themes, appealing to young readers.

According to Hanki Nguyen, the forum grew from a blog that contained the latest book news. After a while, bookaholic.vn earned more members and launched several projects. It also expanded its subjects and has since operated as a newswire that provides updated information on the local and foreign publishing industry.

“Book Box” is another recently-launched book project with the motto “Take a book, leave a book.” Books of all kinds are put in cute boxes which are placed in public places like cafés or on sidewalks.

Anyone can read the books found in these boxes and take them home for as long as they wish. All they need to do is replace the book they take with one of their own, preferably one that will interest other readers.

Inspired by the launch of “little free libraries” in several countries, Phuong Huyen, a translator whose books are popular with local readers, transformed the model into her own “Book Box” community project in HCMC and has had plans to bring it to other provinces.

Film clubs are also one of the most frequented venues by local youths.

Such clubs do not offer the latest blockbusters and high-profile screenings; rather, they are usually focused on introducing and screening rare, hard-to-find films, such as Japanese films, and classic American films from World War Two.

The Cinephiles, one of the film clubs which have set a firm foothold among local youths, offers relaxed outdoor film sessions.

On the lush, wide lawn in a villa at 267/2 Dien Bien Phu, District 3, young people can lounge comfortably on collapsible wooden chairs, watching the vintage films from a large screen.

In addition, themed film exchanges and reviews held by independent organizers are thriving in the city.

In 2012 Tanksuhev worked as a volunteer in numerous orphanages around HCMC. He met members of An Phuc Center for disabled and Agent Orange children, whom he filmed in his first 90-minute documentary, “The Tale of An Phuc House.”

The film was awarded “The Best Feature Documentary Film” at the New York City International Film Festival (NYCIFF) in 2013.