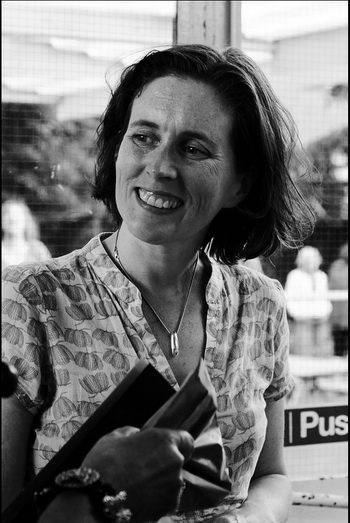 Aoife Mannix, one of the prominent British contemporary writers, is joining a host of activities as part of the Europe Days in Vietnam 2014 in Hanoi and Ho Chi Minh City until Saturday.

She is set to hold an exchange with literature-majoring high school students from Hanoi Pedagogy University at 9:30 am on Saturday.

Other activities include a seminar “Female European writers: love affairs with literature and life,” which she will partake in along with authors from France, Germany and Poland; and a talk with local translator Ta Huong Nhi on works by J.R.R .Tolkien, whose famed works such as “Lord of the Rings” have been translated into Vietnamese.

Mannix will also hold a Creative Writing Workshop at 4:00 pm on Friday at the Hanoi Goethe Institut, 56-58 Nguyen Thai Hoc, Ba Dinh District, on using poetic language to celebrate the imagination and exploring how writers develop their own personal voice.

Aoife Mannix was born in Sweden of Irish parents. She grew up in Dublin, Ottawa and New York before moving to the UK.

With an M.A. in creative writing from Goldsmiths, University of London, she is the author of four collections of poetry and a novel “Heritage of Secrets.”

She has also been a poet in residence for the Royal Shakespeare Company and BBC Radio 4’s Saturday Live.

A wide range of cultural activities have been held across Vietnam throughout this May within the framework of the Europe Days 2014.

Its other highlights include the European Film Festival, concerts and a photo exhibition.

The first edition of the European Union's annual "Europe Days" program was introduced in Vietnam in 2004.

Over the past ten years, the one-month program, including entertaining and intellectual events jointly organized by the Delegation of the European Union to Vietnam, the Embassies of the European Union Member States and the European Cultural Centers in Vietnam, has gained a prominent place in the Southeast Asian country's cultural agenda, attracting many thousands of visitors every year.