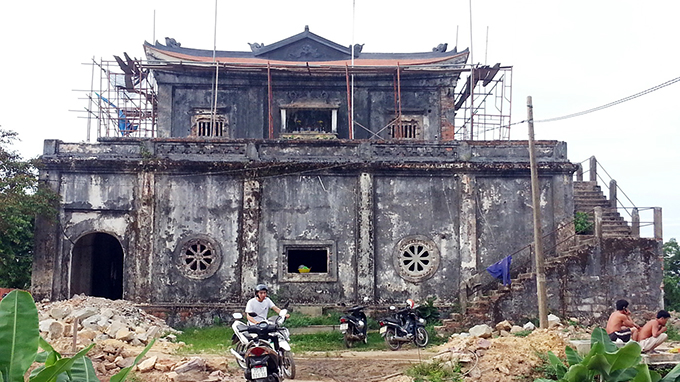 According to Hue Monuments Conservation Center, restoration has recently been kicked off at the royal library inside the Hue Royal Palace, the capital under the Nguyen Dynasty (1802-1945) - the country’s last monarchy - in central Thua Thien - Hue Province.

The restoration project on Tang Tho (Hidden books) Shed, worth VND24.8 billion dong (US$1.2 million), is expected to complete by May 2017.

Built in 1825 during the reign of King Minh Mang  (1791 – 1841), the second Nguyen king, Tang Tho Shed was among the very few architectural works which were made totally from traditionally mortared bricks.

The almost 600m2 area, which was used to store the Nguyen Dynasty’s significant documents and archives, has sustained serious damage over the course of time.

After the restoration is complete, the library will be home to precious manuscripts and rare materials on Hue, particularly the Nguyen Dynasty’s heritage.

Hue Monuments Conservation Center is also working on another project to restore Hoc Hai Lake around Tang Tho Shed, turning the area into another appealing scenic spot in Hue.