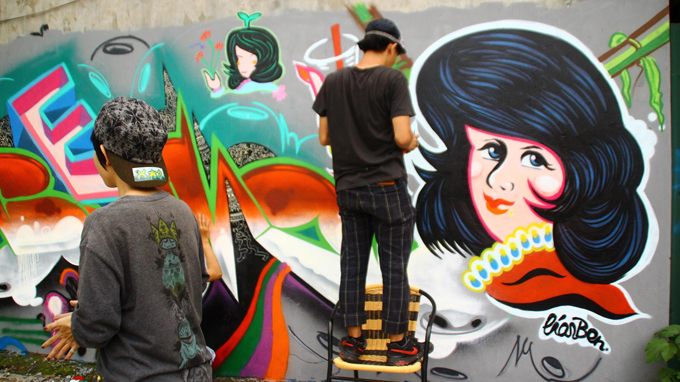 A young Vietnamese street artist has enriched his life and others’ with his vividly colored graffiti and intriguing street artwork.

Ben, or Phan Minh Tuan, a street artist in Ho Chi Minh City, is an active member in the local street art arena.

In 2013, sponsored by a French cultural support fund in Vietnam, and accompanied by his companion Sautel Cago, a tall, rough French man, Ben took a painting trip from the resort town of Sa Pa in mountainous Lao Cai Province in northern Vietnam to the southernmost province of Ca Mau.

He recalled that while hanging around, Ben and Cago spotted a deserted white house perched on a mountain.

The two then entered the house and created their paintings.

Meanwhile, in Hue, a city which seemed reserved and less receptive to street art, to Ben’s surprise, several locals wholeheartedly joined them in creating graffiti on the walls.

During the trip, with destinations including Hanoi, Lao Cai, Hai Phong in the north, Nghe An, Thua Thien- Hue, and Da Nang in the central region, and HCMC, Ca Mau and Can Tho in the south, Ben and his partner created more than 150 visually striking street murals.

The pair’s entire process of painting and moving from one place to another was filmed into 2-5 minute clips, which were put on display at the exhibit which followed.

Along with Truong Minh Quy, a local independent film maker, Ben is in charge of the organizing and coordinating in non-profit art programs which are intended for youth at Zero Station at 288 Nam Ky Khoi Nghia, District 3, HCMC.

A project which the young artist has nurtured and worked on for the past few years centers around learning about the origin of a “mystery girl” whose image is typically depicted on peddlers’ sugar cane juice carts across Vietnam. Sugar cane juice is one of the country’s popular refreshments.

Ben intimately addressed the girl as “Ms Sugar Cane Juice” and created his own paintings on her.

He observed that Ms Sugar Cane Juice is invariably depicted as a gorgeous-looking lady with a fresh glass of sugar cane juice in her hand.

However, her outfits and styles vary from region to region, and her look is now modern and fashionable compared to that of some dozens of years ago.

One of them is his graffiti near 15B Le Thanh Ton street, District 1 in the city’s downtown. The painting features a bag snatcher who is on the run.

Most passengers think that a well-meaning artist has created the painting to try to warn them of robberies and bag snatching in the neighborhood.

“I have no implications whatsoever in all my artwork. I just want to create colorful paintings with some intriguing details and viewers will seek the meaning themselves. Today’s world really needs more color and joy,” Ben shared with a smile.