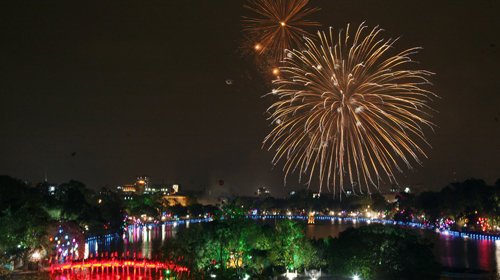 Hanoi authorities have agreed to a plan to organize fireworks shows at 30 different locations on the Eve of the upcoming Tet (Lunar New Year) holiday.

Fireworks displays lasting about 15 minutes each will take place at these locations on February 18, Lunar New Year’s Eve, according to the plan approved by the local People’s Committee.

This year’s Tet will kick off on February 19.

Twenty-five low-range shows will be organized in the heart of the city’s 25 remaining districts.

The 68-floor tower, located at 45 Ngo Duc Ke Street, District 1 in the downtown area, will also feature a US$1.5 million firework and light show on New Year’s Eve.

Tet is Vietnam’s biggest celebration with festive preparations starting around a week before the occasion, and the celebratory atmosphere lasting four to five days from the beginning.