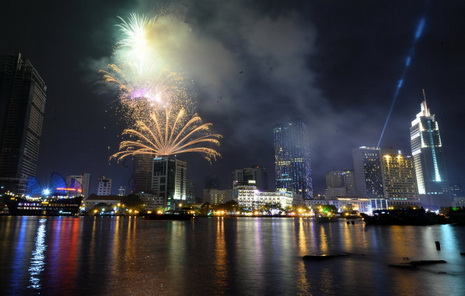 Tuoi Tre News offers photos and a drone video showing how people in Vietnam’s major cities, including Hanoi and Ho Chi Minh City, as well as elsewhere across the country, celebrated the arrival of the New Year.

In the southern city, people thronged to streets in the downtown area from late Wedensday evening.

They posed with groups of friends and families for pictures on the gorgeously illuminated streets and artificial arrangements.

At 0:00 on Thursday, New Year’s Day, everyone burst into joy as  fireworks were catapulted from the helipad on the 52nd floor and the rooftop of the Bitexco Financial Tower – a 68-story skyscraper at 45 Ngo Duc Ke Street, District 1 – as well as from the Bitexco Office Building (BOB), at 19-25 Nguyen Hue Street.   The 15-minute pyrotechnic show was accompanied by sound and 3D laser performances.

3D laser lighting systems had been installed atop the tower, the BOB building, and Tan Hai Long 3 Hotel on Ho Tung Mau Street.

In Hai Phong, the glittery streets were packed by 8:00 pm on Wednesday.

People poured into the square of the city’s Municipal Theater for a special New Year’s show, as well as other scenic spots.

For the past several years, the Pham Ngu Lao backpacker area in Hue City of the central province of Thua Thien-Hue has become a popular venue for foreigners and local youngsters to celebrate the event.

Tourists filled the streets, which were lined with well-illuminated restaurants and bars just after New Year’s Eve.

“Hue has been quite serene in the past few days due to the rain. To my and other tourists’ surprise, the city wakes up so vividly in a festive atmosphere on New Year’s Eve,” commented Maudvdkar, a Dutch tourist.

A spectacular fireworks show, with materials and technology imported from France, was organized at the Bitexco Financial Tower, Ho Chi Minh City’s current tallest skyscraper, in the downtown area on New Year’s Eve.

A foreigner is seen sending her New Year wishes in a lighted flower-shaped lantern.

Apart from the hundreds of thousands of spectators who flocked to the streets and bridges in Ho Chi Minh City on New Year’s Eve, a number of local residents and tourists chose to watch the gorgeous fireworks shows on speedboats.

A spectacular fireworks show, with materials and technology imported from France, was organized at the Bitexco Financial Tower, Ho Chi Minh City’s current tallest skyscraper, in the downtown area on New Year’s Eve.

The countdown moment in Hanoi