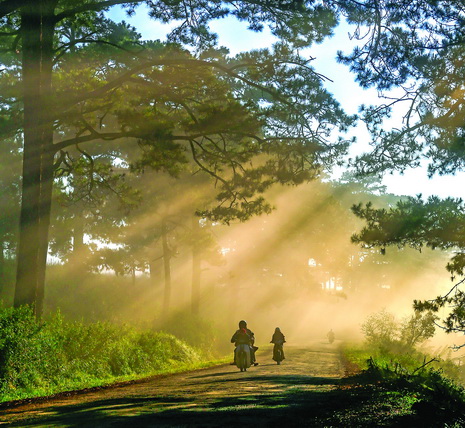 In quest of the time-honored charms in Vietnam's Da Lat

Da Lat City, the capital city of Lam Dong Province in the Central Highlands, boasts age-old charms with its scores of romantic slopes and tastefully decorated villas among other highlights.

Many tourists find the slopes and villas an unforgettable chunk of their experiences in Da Lat City, whether they are first time or recurrent visitors.

The slopes in Da Lat vary in appearance, ranging from stony, dusty, meandering to steep and full of stairs.

They are all adorned with rambling creepers and various kinds of flowers which bloom all year round.

Slopes in the city are typically not long and full of surprises which await tourists to explore.

A horse-drawn carriage is seen carrying tourists on a slope in Da Lat. Photo: Tuoi Tre.

One of them is the slope near the Pedagogical College of Da Lat, one of the city’s French-styled architectural icons.

The slope meanders through age-old villas, which are contoured by hedges made from “trang nguyen,” a perennial tree with flamboyantly red flowers and whitish trunks.

Another gorgeous slope is the one which twists behind the city’s Committee of the Party Edifice.

The fairytale-like scenery is lined with lush pine trees and bushes of richly-colored flowers.

Meanwhile, Nguyen Bieu street is actually a steep slope, which is well known for its astonishing scenery and “banh can” (a kind of round pancake)- one of the city’s specialty.

The slope is believed to be the city’s shortest which linked the villa cluster in the neighborhood with a village where workers building Bao Dai palaces stayed.

Unlike previously when the slope was home to only three or four villas according to locals, it is now teeming with life with scores of “banh can” shops, cafes, tailors’ and modern-looking houses.

However, stony walls are left standing, which helps the slope stand out from others.

The slope leads to a small alley, which is adorned with age-old pine wood windows and weather-beaten walls made up from sheet metal panels.

Like most slopes in the highland city, the other end of the slope leads downwards to  bustling streets.

A view of Da Lat in autumn. Photo: Tuoi Tre.

The slopes in Cu Hill are also widely known for their stunning landscape.

Da Lat is also much loved for its hundreds of French-styled villas, which gives the city the fame of a European town in the Far East.

However, not many are aware that the splendid city is actually the result of the failure of city planning.

The city planning by French architect Ernest Hébrard in 1923 was overly rigid, insisting all private-owned and public villas comply with his homogeneous architectural design.

Thanks to the failure of the plan, the construction of villas in diversified European designs began booming in Da Lat.

It is the richness in architecture and models that helped the city become famous.

A weather-beaten image of a cock is seen on the wall of an age-old house in Da Lat. Photo: Tuoi Tre.

One of the city’s beloved villa clusters is “Railway Villa Cluster” on Quang Trung street, a one-minute walk from Da Lat Railway Station.

The small street is known to tourists for its awesome French-styled villas, which are owned by railway companies.

The mansions, which provide rooms and diverse services, offer tourists from other places a wondrous retreat from the urban bustle and hustle and stuffy, hot climate.

A decorative wheel at a century-old villa in Da Lat, part of which has been turned into a cafe. Photo: Tuoi Tre.