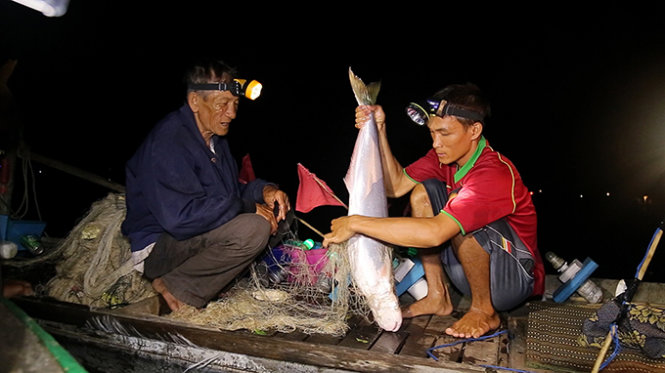 Visitors to the Mekong Delta region in southern Vietnam are now pampered with a wide array of rustic delights, including fishing and admiring lotuses on ecological tours.

Provinces such as Dong Thap, An Giang and Tien Giang, which are crisscrossed with rivers and endowed with vast lotus fields and fruit-laden orchards, have emerged as bewitching tourist attractions in recent years.

One of the tours available in these localities is offered at the T-junction formed by the Long Ho and Vam Nao Rivers in Phu Tan District, located in An Giang.

At 9:00 pm on a typical weekend in March, tourists gathered at a cottage built by the An Giang Farming Tourism Center, where they rested and relished in local delicacies and performances of UNESCO-recognized “don ca tai tu” (southern traditional music) while waiting for locals to go fishing for “bong lau” fish, a variety of catfish.

The Vam Nao River connects the Tien (Front) and Hau (Back) Rivers. The Tien River is a tributary of the Mekong River in Vietnam.

Vam Nao is home to many wharfs where local residents gather to fish throughout the night.

As farmers were casting their nets, tourist boats were not allowed to approach them, but had to wait until the fishermen docked their boats near the river banks.    The fishermen then shared their job experience and even life stories with the attentive tourists.

After the trip, tourists returned to the cottage, where they spent the night.

A man casts his fishing rod on a lake in a Mekong Delta province. Photo: Tuoi Tre

According to Nguyen Thanh Tung, marketing chief of the An Giang Farming Tourism Center, the center receives two or three groups of domestic and international tourists each week.

“Tourists are fascinated by the tours and express hopes of returning. The “bong lau” hunting season typically lasts from the first to the fourth month of the lunar year, or around February to May. When the season is over, we will offer other tours which allow tourists to catch ‘ca linh’ [another common fish species in the Mekong Delta] and enjoy delicacies made from them, as well as other kinds of fish,” Tung said.

Many tourism venues across the Mekong Delta, such as those in Tra Noc and O Mon Districts in Can Tho City and the Vinh Sang Tourism Site in Vinh Long Province’s Long Ho District, also offer a wide array of fishing delights apart from sampan riding, surfing, river bathing, and camping.

Vinh Sang is also home to a miniature zoo with different kinds of wildlife including deer, bears, African ostriches, and peacocks.

Visitors can also go fishing for crocodiles, and drain ditches manually to scoop out fish in farmers’ attire at the site.

Tourists and locals are seen during a fishing trip in U Minh Forest which spans districts in the Mekong Delta provinces of Ca Mau and Kien Giang. Photo: Tuoi Tre

Can Tho alone is home to dozens of recreational fishing sites, including Van Hoa Mien Tay (Southwestern Culture) Park.

Seasoned anglers can showcase their fishing flair in rivers and paddy fields, but the hobby is time-consuming and requires much patience as one has to wait for the tides and right time to catch fish in their own habitat.

Meanwhile, tourists or fledgling anglers prefer fishing in lakes at tourism sites for farmed fish, as the lake fishing service is readily available.

Anglers can cook their catch themselves on the spot or enjoy delicacies from their own catch which are prepared by the site’s staff.

Sheds are pictured at a fishing tourism site in the Mekong Delta region. Photo: Tuoi Tre

Gorgeous ponds and fields of lotus blossoms can be found in abundance in Thap Muoi District, Dong Thap Province.

Several such ponds, which measure almost two kilometers in length and stretch as far as the eye can see, are a common sight at Go Thap Relic, located in the district’s My Hoa Ward.

Tourism site owners said during high tide visitors also indulge in first-hand farming experiences, including riding sampans amidst lotus ponds and picking the flowers, processing them or going fishing for fish and frogs.

Visitors can also hire farmer clothes and pose amidst the lotus ponds.

The Dong Sen Thap Muoi Tourism Site offer packages of such services for affordable prices, at only around VND100,000 (US$5) per person.

The management said they receive over 200 visitors on average a day on the weekend and around half that number on weekdays.

Bui Van Kiet, one of the site’s co-owners, told Tuoi Tre (Youth) newspaper that a group of youth approached him in late 2013 and asked him to cooperate with them in launching lotus-related tours on his lotus ponds.

Lotuses bloom at their best in April, May, September, and October each year, Phan Huy Hoang, a manager at the site, told Tuoi Tre News.

According to Dinh Minh Dung, vice chair of the Thap Muoi District People’s Committee, the district is planning to zone its entire lotus growing area as community tourism complexes.

The committee is also working to tighten its administration of local tourism activities, he added.