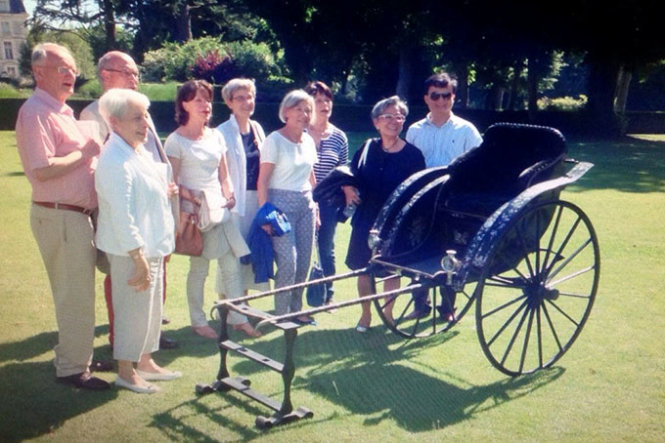 Royal rickshaw comes home, to be displayed in central Vietnam

A rickshaw which belonged to a king of the Nguyen Dynasty (1802-1945), Vietnam’s last monarchy, has finally arrived home after some 100 years being away and will be put on display in the central region next week as a happy ending for insiders’ unprecedentedly concerted efforts.

The rickshaw, which was gifted by King Thanh Thai (1879-1954), the 10th king of the Nguyen Dynasty, to his mother during his lifetime, is considered a royal treasure which is highly cherished for its technical, aesthetic, cultural, and historical value.

The prized item was custom-made from “trac” wood encrusted with conch and boasts sophisticated carvings.

The rickshaw will be displayed at an exhibition, which is poised to run on Wednesday at Dien Tho Palace, part of the UNESCO-recognized Complex of Monuments in Hue City.

The palace is a prominent highlight in Hue, the capital city of the central province of Thua Thien-Hue.

The homecoming is the fruit of Vietnamese culture authorities’ campaign, with the leader of a Paris-based museum giving up its legal right to purchase the object and fund-raising efforts.

At an auction in Tours, France on June 13, 2014 of various treasured items, including King Thanh Thai’s rickshaw, Vietnam’s people won the bid for the vehicle for €45,000. The item fetched €55,800 including organization fees.

In an unexpected twist, Katia Mollet, a curator of the Guimet Museum, declared that France had the right to buy the rickshaw for the same price.

State-run organizations in France were entitled by law to purchase the items at the same price as that offered by the auction winners.

The Vietnam Embassy in France and Vietnamese culture authorities persevered in talking the French museum’s leader out of the intention, and sought for support from French cultural agencies and experts on Vietnamese culture for Vietnam’s bid to purchase the rickshaw.

Some days following the auction, the Guimet Museum, which is well known for its painstaking conservation of a number of Vietnamese artifacts and has helped promote them through its exhibits, gave up its right to buy the rickshaw.

Buu Y, a respected culture researcher in Hue, was taken aback by the full-length details of King Thanh Thai’s rickshaw in a record kept by the French auction company.

According to the auctioning record, the king sold his rickshaw and bed – another royal treasure – to Prosper Jourdan, head of the king’s escort team, who took it to France in 1907.

The rickshaw has seen repairs to and restoration of some of its parts since, the record added.

Jourdan’s heirs later decided to put these two invaluable items up for auction and expressed their wish that after the auction, they will be displayed in Hue, which was Vietnam’s imperial capital during the Nguyen Dynasty.

The two Vietnamese-French people assigned by the Vietnam Embassy in France to attend the auction failed to buy the priceless bed, which fetched a total of €124,000, including  organization fees.

A close-up of King Thanh Thai's treasured rickshaw, which he gifted to his mother during his lifetime. Photo: Vietnamese Embassy in France

Phan Thanh Hai, director of the Hue Monuments Conservation Center, still vividly remembers his anxiety when he proposed that Thua Thien-Hue spend US$50,000 purchasing the rickshaw.

To Hai’s delighted astonishment, the chair of the provincial People’s Committee quickly approved his proposal.

He also underlined the vital roles of the Vietnam Embassy in France, the Vietnamese Ministry of Culture, Tourism, and Sports, and the France Embassy in Vietnam in persuading  the Guimet Museum’s leader to give up on the quest for buying the rickshaw.

Many Vietnamese expats in France and local culture enthusiasts made contributions totaling nearly €15,000 to purchase the royal vehicle.

National flag carrier Vietnam Airlines offered a 50-percent discount on the fares for transporting the rickshaw from France back to Vietnam, while Bao Viet, a local insurance company, also helped with half of the insurance fee.

“This is the very first time an auction has received wholehearted support from that many state agencies, organizations, and individuals. It’s also an unprecedented case that authorities of a Vietnamese province spent such a whopping sum purchasing an antique,” Hai noted.

Stepping up efforts to bring back national treasures

According to researcher Nguyen Xuan Hoa, former director of Thua Thien-Hue’s Department of Culture, Sports, and Tourism, though the Hue Royal Antique Museum is currently home to 11,500 artifacts associated with Hue Palace and its opulent royal lifestyle, many of the royal collectibles have gone missing after historical events and wars, or were lost to negligence or inadequate management.

Hai, director of the Hue Monuments Conservation Center, said the Vietnamese Ministry of Foreign Affairs is slated to join a UNESCO convention regarding the return of stolen cultural heritage.

Joining the convention will provide Vietnam with a legal foundation to claim back its antiques which are currently owned by other countries.

Hai’s center has recently proposed that Vietnamese embassies in other countries find out about Vietnamese antiques.

Local researcher Nguyen Xuan Hoa urged that a fund be set up to help bring back home more of the Nguyen Dynasty’s collectibles in the coming time.