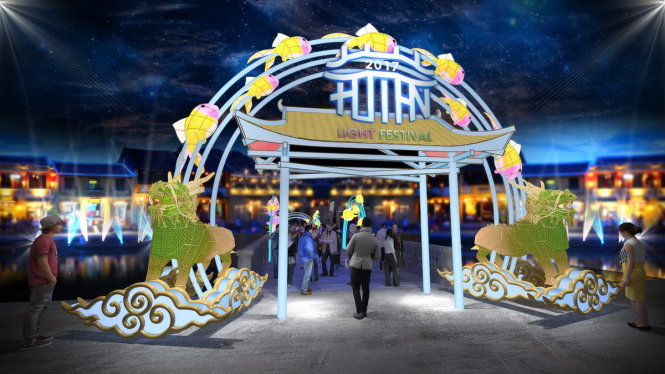 Light festival to illuminate Hoi An in ten days

World renowned Hoi An Ancient Town is poised to light up for a ten-day festival this Friday, with numerous luminous artworks ready to illuminate the popular tourist destination in the central Vietnamese province of Quang Nam.

Preparations for the festival, titled “The Colors of Hoi An,” have basically finished, ready for the Friday opening, Vo Phung, director of the Hoi An culture center, confirmed to Tuoi Tre (Youth) newspaper on Tuesday.

The first-ever light festival, sponsored by Index Creative Village, will run from January 27 to February 2, meaning from the Lunar New Year’s Eve to the ninth day of Tet, according to the official.

The fest will showcase light-based artworks and installations, powered by 3D display technology, allowing visitors to delight in a world full of lights and colors.

The highlights of the light projects are the four artworks representing Dragon, Qilin, Turtle and Phoenix, considered the ‘Four Holy Beasts’ in Vietnamese tradition.

Between 7:00 pm and 9:00 pm during the course of the festival, the Dragon and Phoenix, located at the Kazik Park, and the Qilin near the Hoi An Bridge, will light up to attract visitors.

Tourists can also watch the illuminated Turtle and the 3D Mapping works featuring Hoi An and popular Vietnamese landscapes in front of the old house at 31 Nguyen Thai Hoc Street.

An interactive floor, which displays various lightning designs based on people’s footstep, will erect at the Le Loi – Nguyen Thai Hoc.

The light festival ticket is also valid for use to visit attractions in Hoi An for 24 hours.