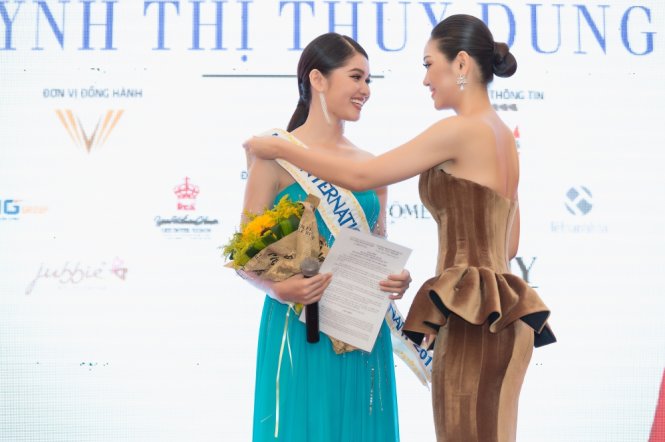 A beauty queen who finished third at the Miss Vietnam beauty pageant last year will represent her country at the upcoming Miss International 2017.

Tran Thi Thuy Dung, second runner-up at Miss Vietnam 2016, will attend the international beauty contest to be held in Japan from October 25 to November 14, the Department of Performing Arts announced on Tuesday.

Dung was nominated to attend by Elite Vietnam, the company holding the copyright for Miss International in Vietnam. The nomination has been approved by the performing arts department.

During a ceremony on Tuesday, Phuong Linh, who represented Vietnam at Miss International 2016, gave the contest’s sash to Thuy Dung. As an internationally practiced procedure, the Miss International representative of each country receives a sash from their predecessor as a form of approval.

Many believe that Thuy Dung deserves to compete at Miss International,

The 21-year-old has gone from a shy girl afraid to stand and talk in front of crowds to the second runner-up of the Miss Vietnam 2016 beauty pageant.

“I would have never thought I would be brave enough to stand on such a huge stage and speak to all of you like this,” Dung, now a senior student majoring in international finance at the Foreign Trade University Ho Chi Minh City, said of her huge effort to challenge herself.

She explained that she never bothers herself with show-business scandals, doesn’t spark hearsay about indecent relationships and never seems to rush from one event to another.

Thuy Dung devotes her time to studying languages, (she is fluent in both English and Japanese), and introducing Vietnam’s tourism and culture to the world as ambassador of the Spring Volunteering 2017 program, as well as attending blood donation events in the southern province of Ca Mau.

Her efforts prove that it wasn’t by chance that Thuy Dung was chosen to represent Vietnam; she earned it.

Regarding her preparation for the upcoming contest, Thuy Dung reassured everyone that she and her team were doing their best to be well-prepared for Miss International 2017.

The team revealed that her ball gown will be designed by well known Vietnamese designer Le Thanh Hoa.

In terms of her pageant skills, Thuy Dung can paint beautiful pictures and play musical instruments.

She also has the calmness and confidence of an emcee in her.

Vietnamese fans will not be disappointed when she represents Vietnam in the upcoming contest.