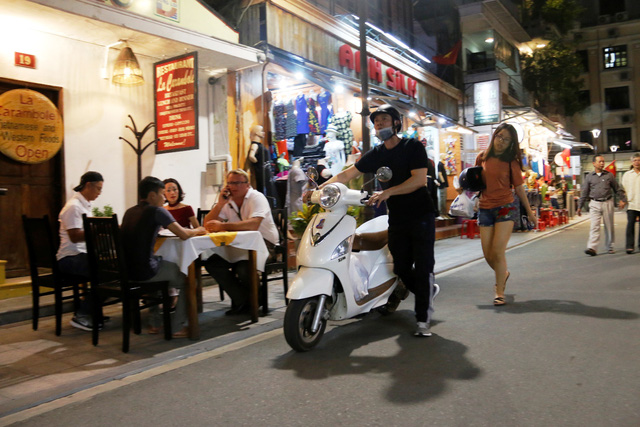 Pham Ngu Lao, Chu Van An and Vo Thi Sau Streets, dubbed the ‘Western backpacker quarter,’ teemed with commotion and activity prior to the opening ceremony of the pedestrian zone.

The zone was off-limits to vehicles starting 18:00 on Friday to prep for the ceremony that began two hours later.

The main stage erected at the Chu Van An and Vo Thi Sau intersection was the venue for fiery street art performances as well as contemplative guitar gigs.

Shops, eateries and cafés lining the streets were packed with customers, while tourists and residents freely strolled along the roadways.

Security forces were deployed along the streets to ensure visitors’ safety.

The new walking zone is the second of its kind to be put into operation in Hue City, home to UNESCO-recognized relics, apart from the Nguyen Dinh Chieu pedestrian zone that runs along the idyllic Huong (Perfume) River.

According to Nguyen Van Thanh, chairman of the municipal People’s Committee, pedestrian-only hours last from 18:00 to 2:00 every Friday and Saturday, and from 18:00 to 24:00 every Sunday.

The local administration has spent more than VND50 billion (US$ 2.1 million) on the street lighting system, traffic signs and compensation for the over-1km stretch of shops.

“We hope the new walking zone will connect with its Nguyen Dinh Chieu counterpart and a pedestrian street on the iconic Trang Tien Bridge, poised to open soon, to form an alluring night-time tourist highlight unique to Hue City,” Thanh said.