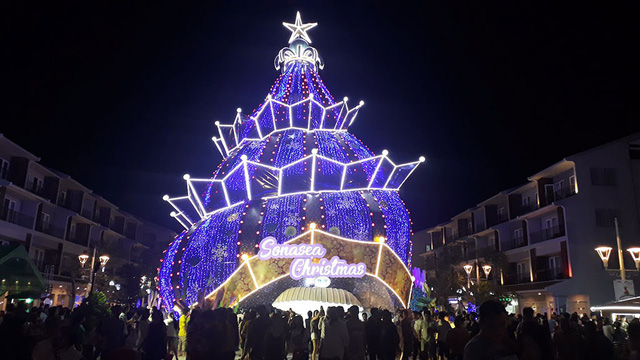 Thousands of domestic and international tourists and local residents filled a newly opened ‘walking street’ on Phu Quoc Island, off the southern Vietnamese province of Kien Giang, on its Christmas Eve opening on Sunday.

The 200-meter pathway, named Sonasea Shopping Center, is located at the center of a group of deluxe resorts in the Nam Bai Truong area, to the south of Vietnam’s biggest island.

The venue operator, CEO Group, inaugurated the walking street with a giant Christmas tree, standing 25 meters high in the shape of a queen conch.

An exhibition showcasing works by foreign and overseas Vietnamese artists is being held at the walking street, and will soon be followed by a fair introducing Phu Quoc’s best agricultural produce.The tree easily becomes the star of the promenade, where visitors flock to have their best selfies taken.

Visitors were treated to a feast of Phu Quoc seafood and artistic performances on the opening night.

CEO Group says it will hold a special music show and a fireworks display on New Year’s Eve.