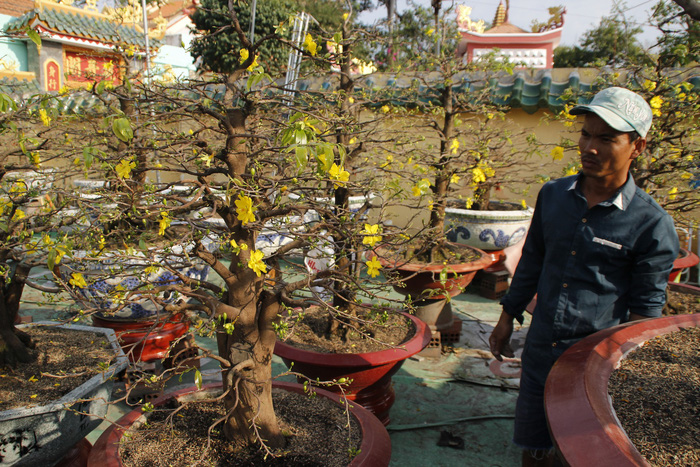 Apricot blossom market in Saigon thrives with Tet around corner

The scene of displaying yellow apricot blossoms – a major symbol of Tet – for purchase at many locations around Ho Chi Minh City has increasingly livened up in the lead-up to the nationwide traditional event due to start in mid-February.

The Vietnamese people tend to utilize plants and flowers to decorate their houses during Tet in the hope of good fortune and happiness for a new year; and apricot trees promising bright flowers figure prominently amongst the options in southern Vietnam.

The trees are usually located along streets in Ho Chi Minh City, where they are highly visible to many passers-by.

Such plants radiate from apricot-growing areas in Ho Chi Minh City or from as far afield as southwestern or central Vietnamese regions.

Contrary to many growers’ conjecture of a business gloom for their products, the majority of apricot trees are expected to bloom opportunely for the Tet holidays thanks to favorable weather conditions of modest rain during the past days.

A number of apricot gardeners said that the demand for the species tripled or even quadrupled last week in comparison with several preceding days.

Nearly 150 apricot trees by a grower Bay Nen, in Thu Duc District, Ho Chi Minh City, have been purchased or hired for decoration over Tet.

Families have mainly bought small or average-sized apricot trees, worth VND2-7 million (US$80-280) apiece, while tall ones are hired by many companies at a cost of VND20-40 million ($800-1,600), according to growers in Ho Chi Minh City.

Their price has increased by ten percent compared with the same period last year, according to Nguyen Van Dung, owner of an apricot-growing facility in Binh Dinh, who brought 300 such trees to the city last week.

One of them is Thanh, living in Ben Tre Province, who has carried 200 apricot trees, mostly middle-sized ones, and positioned them street-side in District 8 of the metropolis.