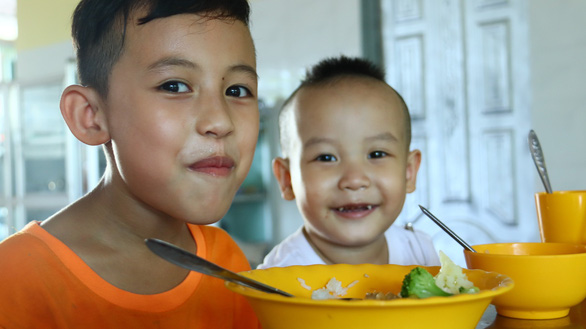 A Buddhist temple in southern Vietnam has been bringing up 16 abandoned babies that were found at its entrance for more than one year.

The Quan Am Pagoda, named after Avalokiteśvara, the Buddhist bodhisattva of compassion, has the characteristic tranquility of a rural monastery in Vinh Long Province, around 120 kilometers from Ho Chi Minh City.

But from part of it, one can sometimes hear playful laughter and babies’ cry.

The young children in foster care here, boys and girls, are from several months to two years of age, with the exception of a child who is a sixth grader.

They are the luckiest that the pagoda discovered at its gate as some found at the location died before they were seen or during medical care.

After catching sight of an abandoned infant, the monks took the baby to hospital for proper care.

They reported the abandonment to local authorities so that the child’s parents might show up.

If no one claims parenthood, the government will give a birth certificate to the infant and guardianship to the temple’s abbot.

The boys were named Nguyen Khanh while the girls are called Nguyen Ngoc. Nguyen is amongst the most common family names in Vietnam.

At first the monks took turns to feed and wash babies and change diapers, but when the number of abandoned infants rose, they asked for help from the laity.

They have also hired five caregivers who are working in day or night shifts, which may explain why the children looked chubbier and more radiant with health.

The babies live in an air-conditioned clean room at the temple.

Young students often come to play with them after school and laypeople willingly get to the pagoda’s kitchen to cook them food every day.

The pagoda plans to provide them with formal education and teach them Buddhist texts and social ethics when they grow older.

A local government leader said the monks’ fostering is touching and highly appreciated.