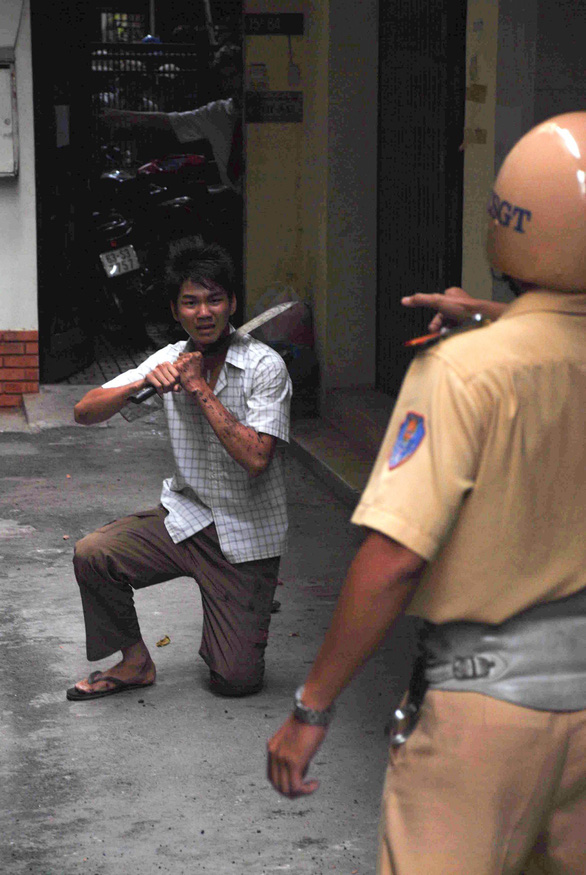 Vietnamese policeman recalls arrest that made him famous, 11 years on

A police officer in Ho Chi Minh City who was featured in a photo collection by a foreign photographer more than a decade ago is once again rising to social media fame as photos of him convincing a robber to surrender have began recirculating across the Internet.

The pictures, taken in 2007 by photographer Dave MacMillan, capture an encounter between a robber and traffic policeman Nguyen Dang Thanh, now 34, in a back alley in downtown Ho Chi Minh City.

Tuoi Tre (Youth) newspaper spoke with Thanh this past Monday after photographs, many candid, began resurfacing on the Internet 11 years after the incident.

Thanh shared that the event was his first-ever arrest, and though he had forgotten the day, photographer Dave MacMillan dating the photos November 24, 2007 jogged his memory.

While patrolling downtown Ho Chi Minh City one afternoon, Thanh came across two men on a motorbike snatching a cellphone from a pedestrian.

He pursued them and pressed them to the curb before they fell off their motorcycle and ran away. One of the thugs made sure to grab his machete before fleeing the vehicle.

Thanh chased the man carrying the weapon to a dead end and used a truncheon to block several attacks from the cornered robber.

After Thanh stepped back, the man held the machete to his own neck and asked the officer to release him, threatening to commit suicide if he did not let go.

“I dissuaded him from doing that. I told him it wasn’t worth taking his own life and that he should value it,” Thanh recalled telling the robber.

“Everyone makes mistakes. What counts is that we recognize and correct them,” the police officer told the man.

As the criminal began to show his hesitancy to kill himself, Thanh continued with the persuasion.

“I’m not alone here. Many people are waiting for you at the other end of the alley. You may escape from me but they’ll catch you and may even beat you to death.

“If you put your weapon down and surrender, I promise to bring you out of here safely and escort you to the police station.”

The man then laid down the knife as Thanh approached him, unbuttoned his shirt, and let Thanh grip his hands behind his back as he escorted him down the main road.

Angry members of the public swung their arms and threw things at the robber but Thanh deflected their attacks and called for the crowd’s sanity.

The pair eventually made it to the police station, safe and sound, as promised.

The officer, who is married with two children, shared that his wife showed no worries looking at the pictures and that his family considers the encounter a normal occurrence for a policeman.

Though it was his first arrest, he has since chased down several criminal suspects and assisted in subduing many robbers, he said.

Eleven years on, Thanh says his enthusiasm has never ebbed.

He also admitted that he was unaware that Dave MacMillan was taking photos during the arrest and was surprised to see an album of the event appear on social media more than a decade later.

Thanh has not met Dave MacMillan in person but has friended the photographer on Facebook and sent him messages thanking him for capturing such integral moments in his career.