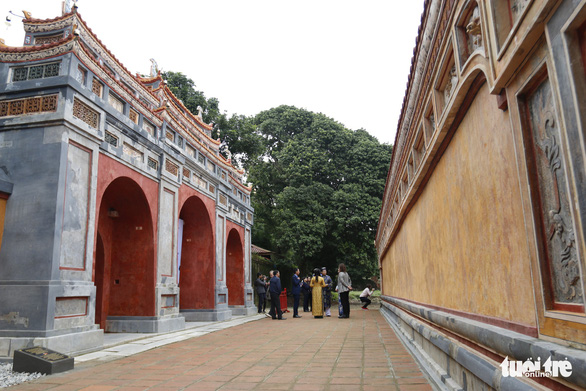 Part of a royal-family-venerating temple nearly two centuries old in central Vietnam has been restored thanks to assistance from Germany.

The Phung Tien (Ancestor Worship) temple in the central province of Thua Thien-Hue has now got the original design and patterns for its entrance gate, outdoor fengshui structure, and hon non bo or the landscape miniature that arranges plants and stones and small objects in ways inspired by nature.

The restoration work, whose completion was announced Monday, was carried out jointly by the Hue Monuments Conservation Centre and Germany’s Society for the Preservation of Cultural Heritage for just over a year.

The Phung Tien temple was built in 1829 as a place to worship a number of emperors and their wives who belonged to the Nguyen dynasty – the last ruling family in Vietnam’s feudalism which officially ended in 1945.

The dynasty chose part of the present-day Thua Thien-Hue Province as its national capital in its inception in 1802 and built the temple, along with residences, palaces and protective walls.

Phung Tien was severely damaged in 1947.