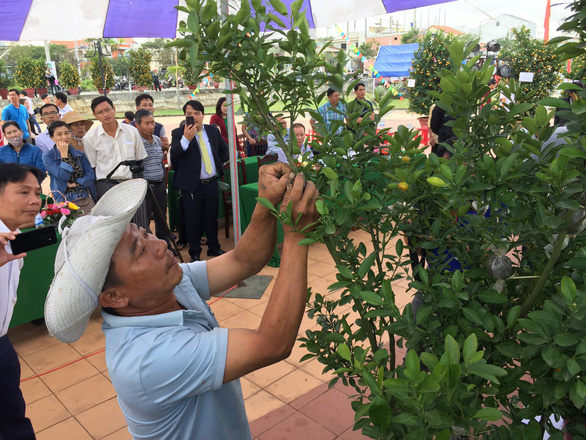 Watch kumquat-shaping competition in Hoi An

Visitors flocked to a competition in the central Vietnamese city of Hoi An on January 12 and 13 to watch farmers deftly shape kumquats – a home decoration believed to bring good fortune during the Lunar New Year holiday.

Hats on, selected artisans and growers exhibited their skills of fashioning kumquats during a contest in Cam Ha Commune, located next to the city’s eponymous ancient town.

They nimbly used scissors to trim branches and tidied them with strings attached to the waist.

Unkempt kumquats were transformed into tidy trees in various shapes, such as the S letter or a fountain.

Awards went to competitors who had created the most beautiful kumquats within five minutes.

The shaping competition was part of the annual festive event held by the municipal administration in its effort to develop the cottage industry of growing kumquats in Cam Ha Commune, where over 65 percent of the residents cultivate the trees, a citrus plant with edible fruit that resembles an orange.

It came as an early celebration in the run-up to the week-long Lunar New Year, which starts at the beginning of February this year.

The commune specializes in taking care of kumquats, known in Vietnamese as ‘tac’ or ‘quat,’ all year round and sells the trees only during the last weeks of the lunar year.

Nearly 70,000 pots of kumquats are averagely sold every year, collectively providing farmers with VND40 billion (US$1.7 million), according to Mai Kim Phuong, chairman of the area’s government.

Many farmers have become rich from the business, Phuong added.

During these days when festive mood is in the air, kumquats of different sizes are being displayed for sale at the commune’s Cam Ha Market.