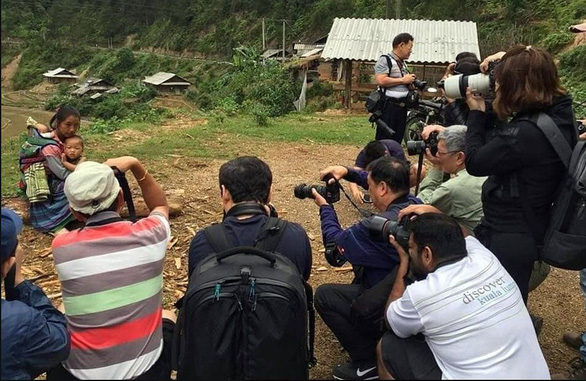 Malaysian photographer Edwin Ong Wee Kee is taking serious heat as “behind-the-scenes” shots of a purportedly staged photo that won him the grand prize at an international completion began popping up online.

The photo in question, a stunning portrait of a Hmong woman carrying two children, was taken by Kee during a trip to northwestern Vietnam.

But just one week after the photo earned him the US$120,000 grand prize at the prestigious Hamdan International Photography Awards (HIPA) on March 13, reports and photographs refuting the artist’s claim that the photo was unplanned began circulating around the internet.

Kee has since doubled down on his claim that the photo was taken spontaneously in a statement he gave to a Malaysian newspaper on March 20, but the controversy has since reignited a longstanding discussion centered around ethics in photography and the dangers of exploiting Vietnam’s rural dwellers and ethnic minorities for ‘artistic’ gain.

Photography tours, trips designed for amateur photographers and photography enthusiasts to visit pre-selected locations to snap shots of particular subjects, like the one Edwin Ong Wee Kee was on when he took his award-winning photo, are not a new concept in Vietnam, according to Vietnamese professional photographer Ha Dao.

Participants of these trips usually 'romanticize' the life and culture of people in Vietnam’s mountainous regions, according to another industry insider.

The source said that customers on these tours all take the same photos from the same angles, putting little effort into creating something unique and original. “They all follow the same creative pathway. They think they are showcasing their skills but really they’re just recreating images that already exist and are quite popular,” he said.

In a separate post on a photography website, Dao, referring to works by French photographer Rehahn, pointed out that he seems to place a particular emphasis on the round eyes and dirty faces of rural children looking up toward his camera.

Though Dao admitted that Rehahn’s photos show brilliant techniques and vibrant colors they are safe and simply “satisfy the tastes of the majority.”

The French photographer has lived in the central town of Hoi An since 2011 and is famous for many photos of people in Vietnam.

Those photos and conceptual pictures are meant to portray a particular subject or situation in exactly the same way as what the photographer wants, instead of serving as an accurate reflection of real life.

Dao wrote in the post that she is concerned that this practice instills misconceptions and prejudices about both ethnic Vietnamese communities and the country as a whole.

She also wrote that ‘romanticized’ and ‘sympathy-seeking’ images that dig into the differences of minority cultures, and those that are not representative of ethnic communities, continue to be honored at some photo contests, with Edwin Ong Wee Kee’s grand prize award at HIPA being only the latest instance.

In the written congratulations to Kee, HIPA said his snap “documented an intense humanitarian moment.”

“The feelings of a Vietnamese mother whose speech disorder did not prevent her from feeling hopeful and evoking a sense of strength for her children.”

In her post, Ha said that ethnic minority groups are normally said to live old-fashioned, passive styles, though that is not necessarily the case. This means photographers who wish to portray them should avoid worsening the misconception, simply by snapping their shutter responsibly.